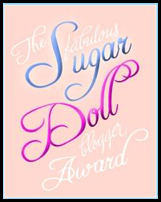 There's something ironic about receiving the Sugar Doll Blogger Award on the same day I reviewed Robin Brande's Fat Cat. Hmmmm. But, I do want to thank the wonderful authors at Mystery Lovers Kitchen for awarding it to me.

As the recipient, I'm supposed to share ten interesting things about me. Since I'm almost finished listing ten, with one to go tomorrow, I could be lazy, and list those same ten. But, I'll come up with ten more facts. And, then that's it! I appreciate the awards, but I'm not listing any more facts. I'm not that interesting!

1. I bake a mean cherry pie. This is appropriate since Mystery Lovers Kitchen includes recipes. I already gave them my recipe for buckeye candy. But, I have a wonderful recipe for pie crust, courtesy of my mother, who won first prize at the Ohio State Fair with her cherry pie.

2. I share a birthday with my college roommate, Jamie. We were born on April 1. No joke! And, we're both short. I always thought the computer matched us as roommates it thought it was funny.

3. When I was Director of my hometown library, I chaperoned a high school group on their trip to Spain. Terrific group - five girls. And, I bought five pieces of pottery, over three trips to the same shop in Barcelona. Loved Spain!

4. Poor Jim. We've been married for over twenty-six years, but I always said the best year of my life was the year I was in grad school. I went to grad school in Washington, D.C., and did something - a museum, a play, an event, every weekend I was there for an entire year.

5. As a kid, I lost my two front teeth when I was having a puppet fight with the neighbor kid, his puppet slipped, and accidently hit me in the mouth.

6. I have loved country music since I was thirteen, and I attended my first Johnny Cash concert. I saw him three times, and had a pennant in my dorm room, saying "I Love Johnny," when Jamie, my college roommate, moved in. As a music major, she was a little unhappy with my taste in music. Later, Jamie learned to appreciate Johnny Cash. Yes, "I was country, when country wasn't cool."

7. I was once the source for a Jeopardy answer when they called the library, and I saw my answer given on the show. "Legend has it, this island was named because the pirate, Jose Gaspar, kept captive women there." "What is Captiva?" (It's only a legend. They wanted me to verify he kept women there, and I said, no, it was a legend, so that's how they phrased it.)

8. I hosted a birthday party for actress Patricia Neal when I was Manager of the Captiva Memorial Library.

9. Just before it was torn down, I was allowed to go through the house, by myself, where Anne Morrow Lindbergh stayed when she wrote Gift from the Sea.

10. One day, Jean Shepherd, author of A Christmas Story, sat and told me stories for over an hour, when he and I were the only two people in the Captiva Library.


Ten, probably not-so-interesting things about me! But, thank you for the Sugar Doll Blogger Award. That's special.
Posted by Lesa at 4:31 PM

I don't know - you sound pretty darn interesting to me! Congratulations on your award!

Thanks, Kathy! And, I didn't pass it on to anyone, so no one has to come up with ten interesting things about themselves!

Actually, Lesa, there was some pretty interesting stuff there. Thanks for sharing.

Thank you, Richard! I was just hoping readers weren't bored!

That's great stuff, Lesa. I especially love that Jean Sheperd told you stores for over an hour. Thanks for this.

You're welcome, le0pard13. Even when that was happening, I kept thinking, so many people would wish to be me right now.

Congratulations Lesa and you are way more interesting than you think.

I found them fascinating! What an interesting life..makes for a very cool person!

Thanks, Mason, and I still have #10 for you on tomorrow's blog!

Thanks, Janet. And, tomorrow's blog quotes you!

These are VERY interesting things about you! I have a funny feeling that we could keep giving you these awards and you could keep finding 10 things...

I would LOVE for Shepherd to tell me stories for an hour.

I don't think there are that many more interesting things there, Elizabeth. I'm reaching way back to come up with Captiva. There are a couple more Captiva related items that I could add, though.

Jean Shepherd had this marvelous idea for a Wizard of Oz story, Elizabeth. I think he just had tons of ideas, and never had time to use all of them before he died.

Congratulations, Lesa! And I agree with Kathy - you are VERY interesting. I've really enjoyed getting to know you -- you are so multi-faceted. I'm so glad I'll have the opportunity to meet you in person this year!

And, someday, Beth, I might be able to say - I'm sitting on the bench with Beth Hoffman in one scene in the movie Saving CeeCee Honeycutt. (smile) That would be a great point of interest! I'm so pleased we're going to get to meet sometime this year.

Ok, you KNOW I'm going to harass you into doing that cherry pie recipe at Mystery Lovers Kitchen, right?!

Love all of your ten amazingly interesting things!

I didn't know you were going to harass me for it, but let me know sometime when you need someone. I have a couple good stories I can include about men who love that pie. (Not even my husband!)

Thanks for sharing all those things, Lesa! They're fascinating. And I'm ready to book you for another guest blog at Mystery Lovers Kitchen because cherry pie is one of my very favorites. What's the best month for cherry pie? June? July? I'm salivating already.

Actually, the secret to my mother's cherry pie is the crust, and you can use that crust on cherry pie, apple, peach. It's good for any fruit pie. It's the crust, and that's going to be the focus when I do blog.

I am so envious you met Jean Shepherd. I love his books.

It was a treat to meet him, Patti. And, he just dropped in at the library that day, and sat and talked.

I appreciate the work of all people who share information with others.

You are a fascinating lady Lesa! What interesting experiences you've had. I enjoyed reading about them and can't wait to see that cherry pie recipe posted.

Thank you, Bonnie. I'm sure the recipe will be posted on Mystery Lovers Kitchen someday. But, it's the crust that makes the pie special, so I'll highlight that. When I'm asked!