The Secret of Everything by Barbara O'Neal

Barbara O'Neal, who gave us one of my favorite books of 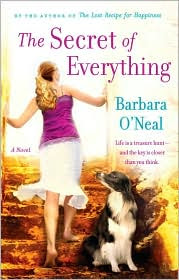 last year, The Lost Recipe for Happiness, has written another beautiful story, a gift of loneliness, love, family, reparation, and forgiveness. The Secret of Everything is filled with that beauty, plus food, with a little of the magic O'Neal shares with Sarah Addison Allen and Alice Hoffman. O'Neal's latest book is a treat for the senses, and the heart.

Tessa Harlow felt lost and guilty, after a hiking tour she led ended in tragedy. She suffered a broken arm and an infected foot, but recuperation at her father's oceanside home left her restless. So, despite her father's premonitions and warnings, she headed to Los Ladronas, New Mexico, a town reputed to be a new hot spot for foodies and celebrities. Tessa thought the town north of Santa Fe might offer a new site for tours. Instead, she ran into a past she never knew she had.

Her first night in town, she ran into Vince Grasso, a sexy man who did search-and-rescue. Vince, a widower with three young daughters, was focused on raising them, and trying to see his two oldest daughters, Natalie and Jade, through a rough period. At eight and six, they were suddenly at war with each other. Natalie, the oldest, felt lost and alone, trying to keep her mother's memory alive.

For thirty years, Vita Solano enjoyed sharing her passion for food at her restaurant, 100 Breakfasts. As a woman who was abused, and lived through it, she offered jobs, and hope, to women who ended up in jail. Her latest project was Annie, just released from prison. But, her restaurant was also a refuge for other lost souls, including Tessa, Vince, and Natalie.

Barbara O'Neal neatly intertwines the lives of her characters with the story of the town, Los Ladronas. As Tessa relives her recent tragedy, memories flash back from her childhood, memories that seem rooted in the history of the town, and its infamous commune. But, these are memories, and stories, that her father never told her. Now, his greatest fears are coming true.

It takes a commune, death, love, resurrection, and forgiveness, to reveal The Secret of Everything. Mix together a story of family, add some dogs, and enough recipes to make a foodie drool, along with a little magic. Here's a book of love, and loss, and tears. It's the type of story Hoffman and Allen have successfully created. Now, add Barbara O'Neal and The Secret of Everything to that special, must read list.

(Before giving the website, let me add that the copyright for Barbara O'Neal's books are under the name Barbara Samuel, the author of other books about strong women, family, and love.)

Nice review, Lesa. I read and loved it too (as I did "The Lost Recipe").

Thank you, Mary! This was my favorite recent discovery. I didn't know Barbara O'Neal had a new book out until about a week ago.

Looks like an author I'm going to have to check out. I haven't read "Recipe" so I'll look for both of them. Thanks!

This sounds like a must read for me. Great cover, too!

Wow, sounds like this book has it all. Can't wait to check it out. I love the idea of all the characters coming together, but yet there's that element of darkness from Tessa's past hanging over, just waiting to drop. Add in the recipes and a magic, what could be better?

It is a must read, Ingrid. And, a better cover than on the last one, when I complained it made it look too much like a chick lit book.

There's nothing much better, Mason. You know it's special when I write to my sister as soon as I finish, and say, you're going to want to read this one.

I think you'll like this one, Kay. I'm not going to ask how long your list is!

I can't wait to read this! I adored The Lost Recipe for Happiness, so I'm sure this is just as good. Barbara's writing is simply beautiful.

You're right, Janel. You're going to like this. I had The Lost Recipe of Happiness on my list of the best of 2009. Her writing is beautiful.

I love Barbara's books! She's so good at characterization and eliciting emotion from the reader. She's a lovely person, too, and deserves her writing success. Since she lives not too far from me, I've had the pleasure of introducing her to my book club.

I'm jealous, Beth! Jealous that you've been able to introduce her to your book club, not that she's a lovely perosn (smile). I'm with you. I love her books. She writes wonderful characters, and I always seem to end up crying at one point during her books.