The Happiness Project by Gretchen Rubin

Talk about taking on a major New Year's resolution! 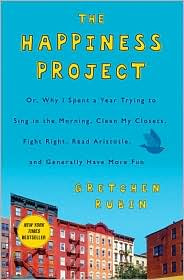 Gretchen Rubin took on such a large project that it called for a large title for the resulting book, The Happiness Project: Or, Why I Spent a Year Trying to Sing in the Morning, Clean My Closets, Fight Right, Read Aristotle, and Generally Have More Fun.

Gretchen Rubin is totally honest about her own inclinations and faults. She admits, "I have a perfectionist, dissatisfied, fretful, worrying nature, and I'm not easily thrilled." So, she decided to take on a happiness project, a different approach to changing her life. Each month, she took one step to work on her happiness, and, as a result, the happiness of her family. Rubin felt as if she was failing to appreciate the life she had. She said she was haunted by the words of the writer Colette. "What a wonderful life I've had! I only wish I'd realized it sooner!" Rubin was determined to lead a happier life, by changing her moods, her actions, and her life. So, she dedicated one year of her life to trying to be happier.

The resulting book takes us through that year, month-by-month. Each month, Rubin focused on an over-all project, but the following months would build on the first. So, in January, she tried to boost her energy, get enough sleep, and exercise. In February, she wanted to remember the love in her marriage. Then, in March, when the focus was work, she started her Happiness Project blog, a blog that caught the attention of others wanting to change their lives.

My favorite month was September. That month was spent in pursuing a passion, and Rubin's was books. It's a passion I share, so it was interesting to read about her month devoted to books. Gretchen Rubin is a reader, and all of her steps along the way were inspired by books. There's a lengthy list of books about happiness at the end of this one.

Rubin admits she didn't accomplish everything she wanted. But, she knows the attempt to achieve happiness is a life-long quest. She learned a great deal about herself during the year. Most of all, she learned that she needed to "Be Gretchen." Great advice, to learn to be ourselves in order to be happy.

The Happiness Project is an inspirational book for anyone who might want to change their life, or even shake it up just a little. Gretchen Rubin has given all of us something to think about in this account of her own resolution.

The Happiness Project: Or, Why I Spent a Year Trying to Sing in the Morning, Clean My Closets, Fight Right, Read Aristotle, and Generally Have More Fun by Gretchen Rubin. HarperCollins, ©2009. ISBN 9780061583254 (hardcover), 301p.

*****
FTC Full Disclosure - I requested this review copy from the publisher so I could read and review the book.
Posted by Lesa at 4:00 AM

Thanks for the great review! This sounds like a book that anyone could benefit from reading, and you definitely piqued my interest!

Thanks, Bored_D. I do think there's something in the book for everyone. And, Gretchen doesn't come across as preachy, because she admits she's not perfect, and has faults.

I've been a fan of the blog for a while. There's one day a week where she focuses on life tips and those are always great. Thanks for the review on the book--I'll put it on my list!

I think this sounds interesting. I'll have to check it out.

Great review Lesa. Sounds like everyone could get something out of this book.

I've been hearing lots about this book. Can't wait to read it!

I've been hearing good things about this book. I saw it on display the other day. I am going to give it a read for sure!

Thanks for the great review!

It is an interesting book, Elizabeth. And, as a fan of the blog, you'll appreciate it even more.

Thanks, everyone. I think there is an idea or two that could benefit anyone. I hope you enjoy it.

And, Happiness, with that name, you should check it out!

a good book for the new year - esp. because things are so cold and bleak right now!

Everyone seems to love this book!

It's an interesting book for the new year. There's always opportunities to change a little, and she might have just the one you're looking for. I like it as a Happiness Project. Would wouldn't want to be happier?

Excellent book! I decided to buy a copy when I found out that Gretchen is a big fan of Harry Potter and children's books generally. I love kidlit and Harry Potter too! So my favorite chapter was May: Be Serious About Play, in which she tells why she loves children's books (the same reasons I do!) and how she started a kidlit discussion group in her local area.

May was a terrific month, too. I agree. What's really great is there was so much interest in kidlit that she started 2 discussion groups! I'm with you and Gretchen, a big fan of kidlit and some YA (not with dark angst.) In fact, I booktalked Fat Cat by Robin Brande, a YA book, today to a group, and I plan to use it for my public brown bag luncheon next month.

I just LOVE your variety!! Aren't we eclectic?!

This is just the medicine I need this year. I appreciate reading your review and recognize that the power to change is within each one of us. I'm interested in her journey, recognition of need/want to change and that she links much of her discovery to passion for books as well. I am NOT alone.

Thanks for sharing this review. You're just what this doctor ordered!

Isn't it fun to read a little of everything, Inside A Book? I hope you enjoy The Happiness Project. I'm with you. I liked the fact that so much of her happiness is tied into books. I certainly can relate to that!

I just got this book and now I can't wait to read it Lesa! I I like that the author broke the project down month by month. It sounds like an inspiring and thought provoking book which is what I could use at the moment.

I hope you enjoy it, Bonnie. I think she did a nice job, breaking it down month-by-month.

This is definitely going on the TBR list. I hope it becomes very successful - the world definitely needs more books like this one!

You're right, Ingrid. We definitely need books about happiness.