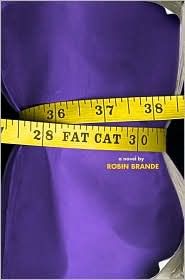 Me, and Other Freaks of Nature, was outstanding, but her second book, Fat Cat, hit me in the heart. The Arizona author writes a unique combination of science, teen angst, and positive changes. Fat Cat is funny, and touching, with a little romance, and strong female characters. It's a treat for the reader who remembers being chunky, a geek, or ostracized as a teenager.

Cat Locke is a seventeen-year-old math and science whiz, determined to succeed in a challenging class in Research Science. Success with the special topic project means a chance for college scholarships to MIT or Duke or Harvard. Cat also wants to beat Matt McKinney in the science fair, the boy who was her best friend until at age thirteen, she heard him agree with another boy that she was "Fat Cat." For four years, Cat and her best friend, Amanda, have hated Matt for his betrayal. Now is her chance to get even.

But Cat's hope for a project that matches her interests in insects are dashed, when she randomly draws a project dealing with Homo erectus. She devises a project using herself as the test subject, changing her diet, eliminating most modern conveniences in her life, and changing her lifestyle. Suddenly, she's attracting the attention of intelligent boys she's known for years, because "Fat Cat" is no longer so fat. So, Cat's experiment takes another turn as she incorporates the male reaction in her experiment. And, all along, she's determined to show up Matt.

In both of her books, Brande created teenage girls who coped with ostracism by peers. Her girls are bright kids who find their own support network, and triumph. These are likable, strong girls, and it's a pleasure to watch teens rise above the pettiness of teenagers. In Cat's case, she learns quite a bit about teenage boys, and about her own pettiness. Cat is a positive role model for any geeky teenage girl. She doesn't hide from her intelligence, and uses it to succeed. Along the way, she discovers she may be the one holding herself back.

So, here's number nine about me, and the reason I could identify so much with Fat Cat. I was a chunky nerd in high school, new to the public school system as a freshman. And, my locker was across the hall from the location where some of the freshman and sophomore thugs hung out. As a chunky freshman nerd, I was an easy target for comments about my looks and my "pig nose," not comments to make an insecure freshman girl any more confident. I disliked those guys so much that, forced to ride the school bus home with that same group, I talked my best friend into walking home with me every day after school, even going so far as to walk home in a snowstorm. We did that until I was sixteen, had a job, a driver's license, and my own car. (Unfortunately, I didn't lose weight as Cat did.)

Oh, I triumphed by my senior year. I was class valedictorian, and ended up assisting some of those same boys in reading lab. But, it's a miserable experience knowing what thoughtless teens have said about you. I admire Cat Locke for using her brains to learn about herself, mentally and physically. And, I admire Robin Brande for giving us intelligent teenage girls, who are not afraid to be smart. Thanks, Robin, for Evolution, Me, and Other Freaks of Nature, and, even more, for Fat Cat.

Lesa, I like the sound of this book. I think any book that shows girls coming to a better place mentally about themselves and their body image is great.

I was not a chubby high schooler, but I was painfully shy. I started down my road to way too many pounds in college. High school is just rough on most everyone I think.

I'll look forward to reading this one as it sounds like a winner. Thanks for sharing.

I love the idea behind this book. I was at the opposite end of the spectrum...a really, really skinny nerd...and got some ribbing, too!

Lesa, this is another reason why you should become a mystery writer--you can make people who were mean to you into murder victims or murderers! :)

There's an award for you at the Mystery Lovers Kitchen (http://www.mysteryloverskitchen.com/)

I agree, Kay. High school is hard on everyone. We just don't see it when we're caught up in our own misery.

This is a winner. I'll be interested to hear what you think.

Oh, thank you, Elizabeth! I still remember the pain, but I haven't put as much energy into killing someone off as Sue Grafton did for her first mystery.

I'm on my way over to check out my award. Thank you!

Wonderful review! Robin's approach to this difficult and painful teen topic sounds truly ingenious. I applaud her and you for being so honest about your own experiences growing up. I was a chubby teen, too, and I'm not exactly Twiggy now, given my culinary writing. My Cleo motto ("Eat with joy") is connected to all of that: Eating issues are not just about fitting into the lastest fashion. Twisted attitudes toward food and body image really can kill our daughters. I'm so glad you reviewed this book. I'm looking forward to reading it.

The book sounds really interesting.
I'm with Elizabeth, you could turn those thugs into murder victims and suspects that get their just reward. I was a chunky kid in junior high school. Boy that was no fun.

You and Elizabeth are so funny. I don't think I have the killer instinct. I still remember them, but I don't have the hatred needed to kill them off.

Here's another teenager with things to solve and some cool cat friends: http://www.conorandthecrossworlds.com

Thanks, Alan. Although Cat is the girl's name, not a subject in the book. Thanks for the link.

I aboslutely LOVE Robin Brandes work! I recently met her (YEAH MET HER!) Last weekend at the TBF in Rochester. It was awesome! She actually have a full conversation with me! This book is AMAZING!

Wasn't Fat Cat terrific, Jordan? I'm jealous that you got to meet Robin Brande. I was at the Tucson Festival of Books the same time she was, but couldn't find the teen tent. Darn!