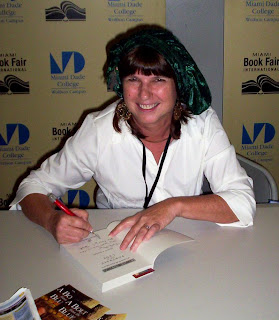 Diane is the author of a mystery series featuring Leonardo da Vinci. But, she's going to give you her own background, and the story of her books, so I'm going to turn the blog over to Diane. Thank you, Diane!


Thanks to Lesa for letting me stop in and talk about bit about myself and my books. I'm a former historical romance author who previously wrote for Pinnacle and Zebra Books as ALEXA SMART and ANNA GERARD. I decided a few years back to make the switch to mystery writing when I realized that my romances tended to be littered with dead bodies. I eased my way into the field by writing short stories with mystery themes for various anthologies. Then, right around the time a certain blockbuster novel was about to debut on film, one of my former romance editors asked me if I'd be interested in writing a mystery series featuring Leonardo da Vinci as an amateur sleuth. Of course, I said yes.

Despite my eagerness to take on the project, however, I have to admit that I really didn't know all that much about Leonardo back then. Oh, yes, I knew that he was a genius, and that he had painted the Mona Lisa and a few other famous pictures. I'd also seen that red chalk drawing of the grumpy old guy that was supposed to be Leonardo's self-portrait--yep, and read that blockbuster novel, too--but that was the limit of my acquaintance with him. But now that I had a proposal to write, I swiftly remedied my ignorance by trotting down to the local bookstore . I picked up one of those "dim-witted person's guides" to Leonardo, along with a copy of his notebooks, and started reading.

A couple of days later, although I was much better versed in my subject, I still wasn't quite feeling the love for the guy who was going to be my new series character. Remember that I'd come from the romance field; thus, I was used to building my stories around handsome, dashing heroes, and not grumpy old men. But as I continued to read, I discovered that Leonardo actually had been considered a handsome, dashing guy in his youth, to the point where he'd served as the model for several artists' works. And it seemed that Leonardo was known to his contemporaries for his strength and athletic ability, as well. I also learned that many art historians believed that the grumpy guy drawing was not Leonardo, but rather his uncle or his father. Hmm...the Florentine, as he was known, was beginning to look like hero material, after all.

But what won me over was the letter that a 30-year-old Leonardo sent to Ludovico Sforza, Duke of Milan. Leonardo was anxious to leave Florence, where he'd trained as a painter in another master's workshop, and find a patron of his own. The letter to Ludovico was, in effect, his resume. In addition to his marvelous skill as a painter, Leonardo was a vastly talented sculptor, musician, architect, and inventor. He knew that the bellicose Ludovico was in the market for someone who could design weapons of war for him, as well as build a magnificent sculptural tribute to his late father. And though Leonardo didn't exactly pad his resume, he emphasized the inventing and sculpting skills over his painting abilities to win the job. He stayed on in Milan for almost 18 years. There, with Ludovico footing the bill, he pretty much had free rein to indulge his wildest ideas...most of which, in the end, were confined to his famous notebooks.

Combining Leonardo's grand fancies with the sly politics of Ludovico's court seemed to make for an ideal backdrop for adventure and murder. Bingo, I had my setting! And, since Leonardo was a relatively young man when he first arrived in Milan, I could make him an intellectual action sleuth, a Holmes-ian detective using his inventive skills and vast knowledge of anatomy to help solve murders. But, as with the aforementioned Sherlock, my version of Leonardo needed a "Watson" to tell his story, someone who could be impressed with the Master's grand intellect, do the grunt work, and, in general, serve as his foil.

Enter Leonardo's boy apprentice, "Dino"...who is, in reality, a young woman named Delfina. Though a talented painter, as a female, Delfina could never buy herself an apprentice in a workshop like Leonardo's. And so she has disguised herself as a boy to become one of a score of other youths toiling under the Master. Soon after her arrival at the workshop (book one in the series, THE QUEEN'S GAMBIT), she stumbles over the body of the duke's murdered cousin. When Ludovico charges Leonardo with learning the killer's identity, "Dino" is drafted as the Master's right hand "man" to help investigate the crime. In emulation of the Master--and, like Holmes' Watson--Delfina keeps a notebook where she records Leonardo's deeds, along with her own commentary regarding those events. 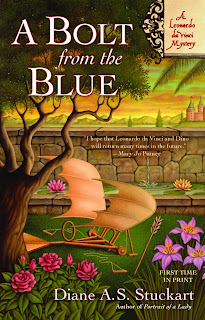 Why did I make Dino a female instead of a boy? There were many reasons, the least of which was because I was used to telling a story from a woman's viewpoint. Maybe another time, I'll spill that particular secret. In the meantime, Delfina keeps stumbling over dead bodies, and she and Leonardo are on their third adventure together in A BOLT FROM THE BLUE. With enough support from the readers who enjoy the series, the pair will be back for many more tales in the future. As for me, these days I am definitely feeling the love for Leonardo. The multiple stacks of research books under my desk which cover his life and times are proof of that!

Another series for me to check out! These sound wonderful, Diane. I've always been amazed by Leonardo. Too funny about your romances being littered with bodies! :)

I'm with you, Elizabeth. I'm going to be checking them out shortly as well. They do sound terrific, don't they?

Another wonderful new author and a most interesting book to add to my list. I love the idea of a girl apprentice. Nice touch.

Glad I piqued y'all's interest! Feel free to drop me a note down the road and let me know what you thought of the books. :)

Thanks, Mason. I hope you enjoy it when it reaches the top of the TBR pile.

Thank you again for doing the guest blog. I really appreciate it!

Lesa, thank YOU. I enjoyed my stay and think you have some great followers here. Definitely a fun place to check out. I'll be back (said in my best Arnie voice).

Is that a threat, Diane, since it was said in your Arnie voice? (grin) Love to have you back!

A tote gifts for girls is the first product to discuss. Resisting totes is an ambition not yet achieved, because of the rolex datejust watchesagreeable styles, colors and designs. cheap omega watches are suitable for various events and wardrobe collections. Irrespective of the chosen apparel louis vuitton wallets , matching totes with different outfits is a possibility. Another delightful feature is that hermes bag outlet have enough space, allowing for the user to carry many items, whenever needed.