Deeper Than the Dead by Tami Hoag 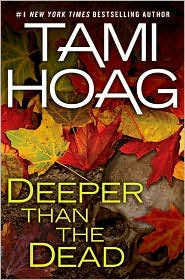 We're all so used to Criminal Minds, and DNA analysis on CSI and other shows, that we've forgotten what investigations must have been like before technology changed crime scene investigation. Tami Hoag's latest suspense novel, Deeper Than the Dead, takes us back to 1985, before cell phones and computers on every desk in the police station. It was also the early years of the FBI's Behavioral Sciences Unit, soon after the birth of criminal profiling, a science not yet accepted by the police. But, Hoag's FBI profiler, Vince Leone, is so skilled we forget he doesn't have all of today's tools.

Instead, he begins with a contaminated crime scene, and children. It's a small group of four fifth-graders who stumble over a woman's body in a park in Oak Knoll, California. One of them, Tommy Crane, actually fell on the mound of dirt that covered the corpse. Since the kids were all coming from school, it's their teacher, Anne Navarre, who steps in to comfort, question, and support them. It doesn't take long for the sheriff's department to call in the FBI, when they discover the woman's connection to another missing woman. And, Leone, still suffering from the aftermath of a shooting, agrees to work with them, on his own time.

Hoag skillfully intertwines the investigation with the stories of the children, their families, and Anne Navarre. It's a fascinating look at the effect of family life on an individual, a study that was in its infancy in 1985. Residents thought they knew Oak Knoll as a safe, college community. But, no one really knows what goes on behind the scenes in a family, as Anne finds to her horror.

Vince Leone is a flawed hero, suffering from unknown aftereffects as a result of shrapnel in his brain. But, he's just one of the intriguing characters in this book. Hoag's suspense novel is a study of characters. She shines with the characters of Vince, Anne, the children, and the police. The greatest weakness in the book is actually in the villain, and his motivation. The book wraps up too quickly, without enough emphasis on the villain, and reasons for the murders. Those connections are weak. But, Hoag's portrayal of the other characters makes up for that weakness.

Despite the weakness, if you want to kick off the new year with a riveting page-turner, Tami Hoag's Deeper Than the Dead should work.

*****
FTC Full Disclosure - I received my review copy of the book from Tami Hoag's publicist at Dutton, in hopes I would review it.

*****
(One more thing about me you didn't know - #6. I'm a big fan of Criminal Minds, watching reruns in bed at night. It made me feel good to have author Alan Jacobson confirm that the shows are accurate in the portrayal of the BSU, minus the jet and private offices, of course.)
Posted by Lesa at 4:00 AM

Hmm. I always want the reason behind the murder to be really strong. I might have a little trouble with this one...

I'll give this one a try. I like character driven stories.

I'm a big fan of Criminal Minds as well. It is probably my favorite TV show right now. I like all the crime shows, or a lot of them, but I was glad to hear that it is mostly accurate as well.

This one might not be for you, then, Elizabth. I really appreciated the strong characters in the book.

Love Criminal Minds, Kay! Like you, it's my favorite right now. (It used to be NUMB3RS, but that isn't quite as good as it used to be.

I think you'll like this one, since it is character-driven. And, most of the characters are very well-done.

I saw this book in the store yesterday and wondered about it. I usually enjoy any of Tami Hoag's books. This one sounds like one I should add to be wish list.

I hate to admit I had not watched Criminal Minds until New Year's. I enjoyed very much. I'm a big fan of NCIS, Bones and CSI (especially with William Petersen). Thanks for #6 and another good book to check on.

I really liked this one, Mason. Funny, my husband, who is a big Tami Hoag fan, wouldn't read it since it was set in 1985. I liked that aspect of it. You never know with readers!

That's OK, Mason. I only discovered Criminal Minds four or five months ago, and I have five years to catch up on. I think I've seen everything for the first couple seasons now, two or three times. I remember watching the very first episode when it was on, and thinking it was weird, and never trying again. Now, I love it, and the current cast.

My eldest daughter brought the first two seasons of Criminal Mind home from college and we have been hooked ever since. I have my VCR (no DVR for me yet) set up to record tonight. Hope it's a new show!

Great cast in that show, isn't it, Julie? I love the fact that it's fairly accurate. I'm totally hooked. Watched an episode the other night just because I liked the ending of it, and sat and smiled at the end, which is kind of odd for that show.

This sounds good - I wasn't enjoying the 'horse' books at all.

I don't think there was a horse in this one, Luanne. Hope you enjoy it!

this was the best book ive ever read! at first i thought that the 80s background was going to be lame but everything about was awesome. when i started it i couldnt put it down. she writes it out like an amazing episode of law and order svu or a awesome criminal movie. you will not be able to put this one down. i recommend it to all! just not 15 and under lol

That's great, Samantha! I'm glad you liked Deeper than the Dead so much. And, thank you for enthusiastically recommending it.

Just finished reading Deeper Than The Dead...enjoyed the characters and the investigation hunt for the serial killer. However I'm not sure I understand the reason for the skeletal bones discovered in the hog lot behind the Gordon Sell's car junk lot. Was it determined that Sell's was the murderer of those remains? Was it added to the story to show the complications & misleading evidence for the investigative team to plow through for the real 'See-no-evil" killer?