Assassins of Athens by Jeffrey Siger 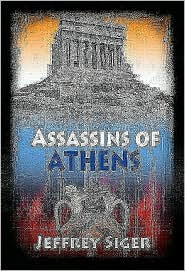 Jeffrey Siger's Murder in Mykonos introduced Police Chief Andreas Kaldis, exiled from his police job in Athens because his investigations rubbed some powerful people the wrong way. It only took six months for him to return to Athens, as Chief Inspector in the Greek Police Special Crimes Division. As one of the most powerful, and feared, men in the police force, he was able to bring his assistant, officer Yianni Kouros, with him. And, he's going to need all the help he can get in dealing with the Assassins of Athens.

When the body of the son of a prestigious Greek family is found in a dumpster outside "perhaps the seediest gay bar in the seediest section of Athens," Andreas knows someone is sending a message. He knows the family is stunned when he informs them of the death, but he didn't expect them to sell their property and leave Greece.

Everyone in Athens seemed to know that the boy's father, Zanni Kostopoulos, was at war with the powerful Linardos family, owners of The Athenian newspaper. And, power struggles are common in Greece. But, who would attack the children of the powerful? Andreas and his team can handle the investigation in the bars and streets of Athens, but it's going to take a special connection to give them a link to the elite. So, who is pulling the strings that brings a call from one of the most powerful media figures in the country, a man who has a strange story of conspiracy? And, what is Chief Kaldis to believe? He knows "Greeks see a conspiracy in the number of raisins in a cereal box."

Siger's first novel involved an intriguing mystery on Mykonos, but Assassins of Athens is even better. It's a complex police procedural involving politics, powerful, wealthy people, and men who have their own motives for violence. And, the Greek history, as told to Andreas, is fascinating. Siger's story also includes well-rounded characters, from Kaldis and his family history, to Andreas' powerful secretary, Maggie, a woman with secrets. In fact, the stories behind the individual characters are as complex as the story of Greek politics. Assassins of Athens is a police procedural with mystery, violence, a little romance, and light touches of humor. Let's hope Siger finds the appreciative audience he deserves.

*****
FTC Full Disclosure: The publisher sent me a review copy, in hopes I would review it.
Posted by Lesa at 4:00 AM

I've enjoyed mysteries set in unusual places lately--this sounds like one with a complex plot and interesting setting. Thanks!

I have the first book, Murder in Mykonos, here to read. Looks like this one might be another good one for me to pick up at the Poisoned Pen next week.

I liked the first book, Elizabeth, but this second one is even better. Terrific!

It's too bad you won't be here by Sunday, Kay. Siger is going to be at Poisoned Pen, along with Bob Morris and Brian Freeman.

I found your blog by way of Jen's Book Thoughts. I'm a fan of Jen's blog and when she referred to you as her mentor, I just had to come over.

Jeffrey Siger and Betty Webb both sound like authors I'll be putting on my TBR list! And I love reading stories set in cultures and countries I don't know much about.

And, just to say "Howdy-do!", I thought I'd let you know where your award has gotten to. I've boomeranged your award back to you. It was a lot of fun!

Hi Christine! And, welcome. Any friend of Jen's... (smile) I hope you stop by frequently.

Good luck with that growing TBR pile. It will only get worse, I promise.

And, I'll stop by today. Thank you! I'm glad you enjoyed the award.

it may seem self congratulatory to say another Poisoned Pen author sounds great, but he does. Thanks, Lesa!

You're welcome, Clea. This one is terrific. (And, it doesn't sound self congratulatory. It's a good publisher.)