I'm finding it hard to get into books this time of year, 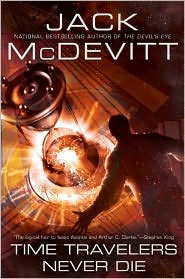 so I turned to something different, a time travel novel that is also perfect for Sunday Salon. Jack McDevitt's Time Travelers Never Die provides two men with the opportunity to hold conversations with everyone from Galileo to Benjamin Franklin, the perfect salon.

Adrian Shelborne's funeral provides Dave Dryden with the opportunity to reflect on his adventures with Shel. Shel was the second time traveler, following in his father's footsteps, and, fortunately for Dave, he needed a companion.

And, the two men were following in Michael Shelborne's footsteps, because Michael totally disappeared one night from a locked house. Two weeks later, Shel was given an envelope with instructions to destroy his time-travel devices. Fearing that Michael was caught somewhere in the past, Shel took Dave, a linguist, with him on a trip to look for his father. Their travels took them to Galileo's Italy and the March at Selma in 1965 before they found someone who remembered his father, in the Library at Alexandria. But, their efforts to find Michael Shelborne continue to land them in strange situations, while giving them the opportunity to meet fascinating people from the past.

It's compelling to watch the two men travel through time. Shel is the extrovert, introducing himself to Ben Franklin, Socrates during his last day before he drank poison. And, he's the one that is loved by Helen, a woman Dave had hoped to include in his own life. Dave, the loner, is the scholar, the one who brings back plays by Sophocles, and befriends Aristarchus, the librarian in Alexandria. And, it's Dave that will have to step in when Shel discovers the horror of his own future.

One of the characters remarks "There was an especially moving aspect to sitting in an event armed with a historical perspective." The two men know what will happen at Selma, during the Lincoln-Douglas debates, even during sporting events. It's absorbing to watch them move from event to event, meeting Churchill before he's famous, and Socrates on his last day. And, anyone who loves libraries will appreciate the scenes at the Library of Alexandria, and will love Aristarchus. But, there's something missing in this novel. As much as I enjoyed the time travel, the book lacked that dramatic event that would carry the story. It just became a sequence of events until the last page.

I wanted more from Dave, in particular. The characters let me down, somehow, in this novel, and just became travelers. They didn't seem to participate in their own lives, which may have become the problem for the novel. It lacked drama.

As much as I like Jack McDevitt, and time travel, I'd recommend Time Travelers Never Die, with the caveat that it's a story of time travel that lacks emotion, and heart. There are engaging glimpses of the past, but not enough drama to carry the story.

It sounds like it had so much promise. Makes me want to see the 1960 movie, "The Time Machine," starring Rod Taylor and Alan Young and based on H.G. Wells' novel.

It did have so much promise, and I'm still glad I read it, but I reached the end, and thought, that's it? There wasn't enough excitement.

Too bad the author didn't take it any farther. I've always been interested in the idea of time travel...having a meal with a fascinating person from the past, etc.

Exactly, Elizabeth! He's a terrific author, but he needed to take it farther. You phrased it perfectly.