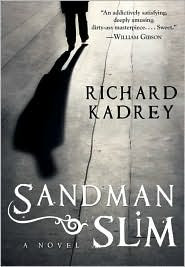 It's for those of us who were fanatics about the TV show, Brimstone. Fans of Simon R. Green's Nightside series will appreciate this novel. It's just as sick, depraved, and totally irreverent about religion as Green's books. In other words, it's a raw, violent book, with an anti-hero who is totally out of control. There's non-stop action, humor, unforgettable characters, and it's terrific supernatural fantasy.

James Stark was a nineteen year old magician in L.A. when his "friends," other magicians in the Circle, sent him Downtown, to Hell. He was the "first and only living human to ever set foot in Hell," and with each fight he had there, he became harder and harder to kill. Eleven years later, after a career as a successful hitman in Hell, where he acquired a nickname, Sandman Slim, Stark escaped. He smuggled three items out, a black blade, a Veritas coin that never lies, and the Key to the Room of Thirteen Doors. And, he only had one goal - to kill the magicians who sent him to Hell, and killed his girlfriend, Alice.

In some ways, Stark hasn't grown up. He wastes precious time and energy stomping around in anger. He's judgmental about others, despite his own life. And, with his one-track mind, finding Alice's killers, he alienates others who would be his allies, from Vidocq, the two-hundred-year-old Frenchman (yes, that Vidocq, the thief who became founder of the Sûreté Nationale), to the manager of a porn video store, to an angel. Even so, he finds some unusual friends to join in his fight against Mason, the magician he hates the most. As Candy, the assistant to the mysterious Dr. Kinski, says, "We're all family now. All the funny little people who live in the cracks in the world."

Oh, there are cracks in the world. And, Sandman Slim is only going to make those cracks worse as he fights for revenge against the killers of the only person he ever loved. Kadrey's novel is 400 pages of drama, turmoil, and one man's Hell, brought to earth. And, Lucifer himself hints to Stark that there just might be more problems in store for Sandman Slim.


FTC Full Disclosure: Library Book
Posted by Lesa at 4:00 AM

I don't remember Brimstone! But the book sounds fascinating. I love flawed protagonists and this sounds like one with some big flaws!

Brimstone only ran for 13 episodes in 98-99, but I've seen every episode, and a friend even gave me a DVD of some of them. It runs sometimes in back-to-back episodes on some of the cable channels. It's about a cop who was released from Hell, providing he brought back the escaped evil spirits. Peter Horton was terrific as the cop, Ezekiel Stone, but it was John Glover who stole the show as the devil.

never heard of Brimstone but I confess this sounds like fun! Deliciously dark fun (kind of like dark chocolate, but without the calories). Thanks for the head's up!

You're welcome, Clea. I think these kind of books might go with your kind of music. (smile) Hope you like it!