Talk about rushing through the holidays! It seems odd to be talking about January book releases already, but I have some exciting ones in my closet. So, check this list twice, and place your holds at your local public library, or order the books from your favorite bookstore. Then, just think about those treats waiting for you next year!

Mary Balogh's Regency romance, A Matter of Class, is the story of a wealthy man faced with an ultimatum. Marry the disgraced Lady Annabelle Ashton, or find himself cut off from the family funds. It's an engagement marked by mutual resentment from both the prospective bride and groom. And, in a tale of secrets, deception, and the trials of love, nothing is what it seems.

Lenny Bartulin's Death by the Book marks the debut of secondhand bookseller Jack Susko. Of course, Jack doesn't turn down some easy money for finding as many copies of the works of an obscure poet as possible. He doesn't care what the wealthy businessman does with them, but, soon, it's more than books that are disappearing.

January marks the return of Dixie Hemingway in Blaize 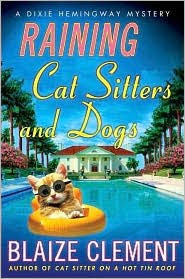 Clement's Raining Cat Sitters and Dogs. A mysterious young girl is missing, and Lieutenant Guidry is tied up in the case, since she might be a material witness to a murder. Guidry's absence forces Dixie to go it alone to confront criminals who are determined to get what they want.

Joanne Dobson's first Professor Karen Pelletier academic mystery was an Agatha Award nominee. Death Without Tenure is the sixth in the series, but Karen might not survive a police investigation. She's up for a tenured position at Enfield College, but her rival is found dead, and Karen's top on the list of suspects. 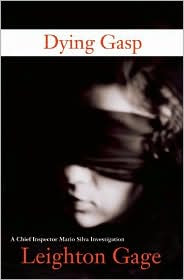 Dying Gasp will be a treat for all of us who look forward to the return of Leighton Gage's Chief Inspector Mario Silva. It's a story that takes Silva and his team from the Brazilian beach at Recife, where the granddaughter of a prominent politician disappeared, along with a friend, to Manaus, a jungle hellhole on the Amazon.

It's The Puzzle Lady vs. the Sudoku Lady in Parnell Hall's latest entertaining mystery. Cora Felton's sudoku books have just edged the Sudoku Lady's off the Japanese bestseller list. When Minami shows up to meet the Puzzle Lady, they don't even have a chance to tangle before a killer strikes, leaving a sudoku puzzle at the scene of the crime. Cora is forced to clear her rival's name, while trying to knock her off the list again. Once again, Will Shortz' puzzles are featured.

And, of course, I have a copy of Beth Hoffman's Saving CeeCee Honeycutt in my closet. I still predict that this debut novel, about a young girl rescued by a group of steel magnolias, is destined to become a favorite for book groups. Make sure you're on a list to read about CeeCee, and the older women who take her under their wings.

I find the premise of Peter May's Virtually Dead 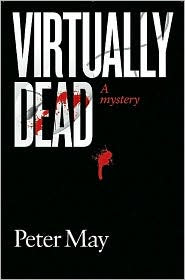 fascinating. Crime scene photographer Michael Kampinsky's life is a mess, so his psychologist persuades him to enter the virtual world, Second Life, to participate in a new kind of group therapy. But, murder isn't confined to the real world, and Michael's Second Life alter ego, Chas, ends up working for the Twist of Fate Detective Agency. Along with an exotic dancer and escort girl, Doobie Littlething, he uncovers a series of killings and a financial scam. But, Chas' Second Life actions could endanger Michael's real and virtual lives.

Thursday Night Widows by Claudia Piñeiro is a psychological portrait of a middle class in Argentina, living beyond their means, and struggling to conceal deadly secrets. The pampered residents of Cascade Heights in Buenos Aires, ignore the poverty outside their walls. But, crime can find them as well, as evidenced when three bodies are found at the bottom of a swimming pool.

January must be the month for exotic settings, since Jeffrey Siger takes readers back to Greece in Assassins of Athens. When the body of a boy from one of Greece's most prominent families turns up in a dumpster in one of Athens' worst neighborhoods, Chief Inspector Andrea Kaldis, of the Greek Police's Special Crimes Division, sets out on a search for answers. It's an investigation that will take him deep into the criminal side of Athens nightlife, and the world of Athens society. It's sure to mean murder, revenge, and danger.

Beth Hoffman and Lenny Bartulin aren't the only authors with enticing debut novels in January. Here are two other titles that sound interesting, although the books aren't in my closet.

Alice, I Have Been is by Melanie Benjamin. What became of the little girl Lewis Carroll made famous in his story, Alice in Wonderland? In Benjamin's novel, Alice Pleasance Liddell is now 82. Alice looks back at her life, the mother who rasied her, the sons she sent off to war, and her life beyond the looking glass.

The Bricklayer marks Noah Boyd's debut. Noah Boyd is a pseudonym for a former FBI agent. The story is about Steve Vail, an agent just fired from the FBI, who is needed for a special assignment. Vail is asked to work under-the-radar when a terrorist group called Rubaco Pentad is killing human targets. They've threatened to escalate the violence unless the FBI pays them what they want.

I hope you found some treasures that you'd like to add to your list of January books!
Posted by Lesa at 4:00 AM

All kinds of January goodies! And I love having a lot of books to read in January--nasty, cold month here. Thanks.

Love the cover for Raining Cat Sitters and Dogs.

So many great new books to look forward to. Thanks for sharing.

As usual, you have introduced me to some series that I simply must check out, most notably Death by the Book and the Professor Karen Pelletier series. I am also fascinated by the concept of the book, Alice I Have Been.

It looks like there will not be a shortage of great books to read in 2010. Thanks, Lesa, for all the recommendations.

You're welcome, Elizabeth. Good books to stay in the house with!

Isn't that a great cover, L. Diane? It's a good series, too, but I know you're not into mysteries.

You're welcome, Mason. Definitely, my pleasure to share good books!

You're welcome, Molly. It's always interesting to see which books jump out at people.

Virtually Dead is fascinating to me, too. I loved hearing about it at the online conference - I did get to experience that! :)

I'm reading THEREBY HANGS A TAIL (Spencer Quinn), the follow-up to DOG ON IT. I think this is a January release, too, no?

I can't wait for Raining Cat Sitters and Dogs - I love that series.

Darn, Jen. You have a copy of Thereby Hangs a Tail. You're right. It's a January pick, but since I don't have it in my closet, it's on tomorrow's Hot Titles list. I hope it's as good as Dog On It!

Me, too, Ingrid. I'm looking forward to reading it.

Lesa, thank you so much for including my novel in your January "Treasures" list!

Beth, you're welcome. Saving CeeCee Honeycutt is definitely a treasure!