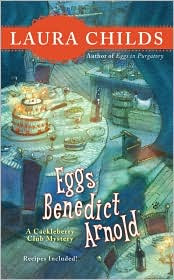 It would be hard to live in Kindred, and not spend every waking hour eating at the Cackleberry Club café. The three women who run it, Suzanne Dietz, and her partners, Petra and Toni, are serving up great food and friendship. And, when a friend becomes a murder suspect, they're even willing to step in and do a little investigating, as they do in the second book in the Cackleberry Club mystery series, Eggs Benedict Arnold.

In their forties, the three women found themselves in a period of transition. Suzanne's husband died. Petra had to put her husband in a nursing home, and Toni's slightly sleazy husband left her for a younger woman. Even though they own the Cackleberry Club, and it's adjoining bookshop and knitting store, they take on additional projects. When they close up the Library Committee's bake sale fundraiser, Suzanne takes a cherry pie to Ozzie Driesden, owner of the local funeral home. But, her discovery of his body almost lands her on a slab as well, as she's chloroformed, and left on the floor there. So, even though a friend who becomes a suspect asks Suzanne to ask questions, this investigation has a personal aspect for Suzanne.

Childs' latest mystery is complex, with a surprise killer. And, as with many cozies, there are recipes included. But, the three owners of the Cackleberry Club are the greatest strength of this book. Their café, with its attached shops, is "a center for female bonding for the tri-county area." Suzanne Dietz has a wonderful attitude about life, one she explains to the man she's interested in getting to know. She has a generous heart, and finds it hard to turn down her friends, even when they're as reckless and spontaneous as Toni. Petra is a rock, the baker and chef who keeps the business going, while the other two owners are poking around, and getting in trouble. And, it's evident that Suzanne is gutsy, and curious, as she says, "Wondered about the wisdom of taking things into her own hands. Bad idea. Really bad idea." But, the reader knows Suzanne will plunge into danger, and find a killer, in this enjoyable mystery.

(Oh, and the recipe for Frozen Lemonade Pie? Made it with a lemon snap crust instead of graham crackers. To die for!)

*****
FTC Full Disclosure: I received an ARC from the author, in hopes I would review it.
Posted by Lesa at 4:00 AM

Can I crack the egg?

Go for it, Shelly - writing the book, as well as cracking the egg. It was a fun, interesting book.

I just love Laura Childs and her books. The tea shop series is my favorite but I do really like the scrapbooking series and the first Cackleberry Club was good too. I'm going to try that lemonade pie after your endorsement.

Have a happy new year, Lesa.

I'm very interested in Laura's new book. I didn't realize she had such a strong mystery in this book and a surprise murderer. I can't wait to check it out!

I just couldn't get into the tea shop mysteries, Kaye. But, I really liked Suzanne in this book, and the cafe. My sister endorses the frozen lemonade pie recipe as well. She said she made it for a 4-H demonstration one time!

There is a strong mystery in this one, Elizabeth. And, I didn't guess the murderer at all.

I'm with you Lesa I'd like to visit the Cackleberry Club cafe. I think I gain five pounds just by reading what they were serving. :) Loved the book.

The Cackleberry Club cafe is enticing, isn't it, Mason? And, I agree with the pounds. In fact, it made me so hungry that I made that pie!

I have read the first book in the scrapbooking series, and a couple in the tea shop series, but somehow I have missed the Cackleberry Club. I will definitely have to check it out!

You do have to check out the Cackleberry Club, Molly, and let me know what you think. I preferred this series.

I haven't read any of the books in this series, yet! Sounds like a wonderful setting and cast of characters.

I hadn't read the first book in the series, Janel, but it didn't make any difference. I was able to pick up on this quickly.

Thanks for the review, Lesa! I'll look forward to reading this one. I *love* Laura's tea shop mysteries, so I know Cackleberry Club will be a good read.

Happy New Year from Mariandy - new reader of your blog! :-)

what fun! And the pie sounds delicious, too.

You're welcome, Mariandy. I hope you enjoy the Cackleberry Club as much as I did.

Happy New Year, and I hope you come back regularly.

It was fun. And, the pie is delicious! Happy New Year, if I don't "talk" to you before then. Have a safe one.

Thank you for this author. My mom is really into mysteries and I'm going to have to remember this author for her. :)

Oh, that pie sounds divine. And I could make it so it's gluten-free!

Oh, you're welcome, Buckeye Girl. I'm glad I could help you find another author for your mother.

If you like lemon, Beth (and, I do!), it's heavenly. That frozen lemon is wonderful.