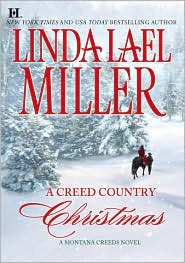 This wasn't the book I meant to review today, but, at lunchtime, I discovered I had left my book at home. Linda Lael Miller's A Creed Country Christmas was the holiday book I picked off a shelf. And, it made for perfect reading for our cold, wet weather.

In the eyes of Juliana Mitchell's brother, she fell from grace. She refused to marry the man he selected, insisted on becoming a schoolteacher, and, even worse, moved to Montana to teach at the Indian School. So, when the school closed, and she wanted to protect four children, he refused to help her. There weren't many choices for a woman in 1910.

Fortunately, Lincoln Creed, owner of Stillwater Springs Ranch, had been advertising for a governess for his seven-year-old daughter, Gracie, or, if that failed, a housekeeper. As a stop-gap measure, he offered Juliana and her four students a place to stay on the ranch, until Lincoln and Juliana could come to some decision. To the surprise, and embarrassment, of both adults, Gracie was convinced he brought Juliana home to marry her, and give her a Mama.

Linda Lael Miller's Christmas story is so much more. It's a novel that points out the discrimination against Indians. And, it's obvious that ranch life in the early 1900s was not an easy, romantic life. Childbirth was difficult, and women frequently died, or lost their babies. It's a romantic story, with warm, sexy romantic scenes between a married couple. Most of all, it's the story of strong people, trying to survive, and make a life, while doing the "right" thing, because of love.

I'm glad I left my book at home, to discover a treat, Linda Lael Miller's A Creed Country Christmas.

Lesa, you seem so organized that I'm relieved to know that you forget things sometimes, too! :)

This sounds like an interesting read...I usually enjoy books set in this time period. I'll put it on the list!

Oh, Elizabeth! That's only in my reading life that I'm that organized. And, at work, my staff keeps me organized. I have the best people to work with in the world. Jim would roar with laughter if he knew someone referred to me as organized!

This sounds like a wonderful book. I'll have to include it on my BTR list. It also sounds like it would be a great Christmas gift. Thanks for sharing it.

Sounds good. I've been furiosly reading many of this year's Christmas books to give a presentation to a local book club. Last evening I read Debbie Macomber's The Perfect Christmas. Probably the best I've read this season. Good, solid story line, interesting characters and no guardian angels tossed in to make it a holiday book.

You're welcome, Mason. Just dumb luck that I picked it off the shelf. Very good book, though! I hope you like it.

It's a swap, Melanie. I have Macomber's A Perfect Christmas in my TBR pile at home, and haven't had a chance to read it. Nice to know it's a good one!