It's just a crime that The Treacherous Teddy will probably 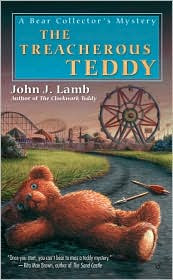 be the last book in John J. Lamb's Bear Collector's Mystery Series. These unique mysteries just didn't sell enough books. I will say Berkley Prime Crime gave them terrific covers by artist Jeff Crosby, and there were five books in the series, but I don't know that they ever found the right market.

How do you market an outstanding police procedural series that appears under the auspices of a cozy series, and includes teddy bear shows and collecting? I don't know how Lamb and Berkley could have done a better job, so I feel we bloggers didn't do a good enough job promoting these books. I only discovered them in the last couple months, so I fell a few years short in getting behind these books. And, I apologize to all of Lamb's fans who are going to miss further adventures from Brad and Ashleigh Lyon.

Saying that, The Treacherous Teddy would actually wrap up the series if it has to do that. Brad and Ashleigh Lyon are quite content with their life in the Shenandoah Valley. Brad, a retired homicide inspector from San Francisco, acts as an investigation consultant to the local sheriff's department. Ashleigh is now a volunteer deputy sheriff. And, they enjoy their lives as bear collectors and artists. They have good friends, including the local sheriff, Tina Barron, and the owner of a local restaurant, a Russian immigrant with a mysterious past.

When The Treacherous Teddy opens, Brad is home working on a bear, and listening to the police scanner when he hears Ash assisting the local game warden until she's sideswiped by a car. Giving up the chase when she's afraid to endanger others, she returns to the farm where the car appeared, and finds a body. Now that Saab is of even more interest to the sheriff's department.

It's a busy time for Brad, Ashleigh, and Tina. They're all involved in the first local bear collector's show, but murder takes precedence. And, there are too many suspects, a local poacher, a neighbor that hated the victim, and the driver of the mysterious Saab. As they wear out, running from one suspect to another, and back to the scene of the crime, a local house goes up in flames. Just what they need, arson on top of murder.

John J. Lamb's mysteries are strong police procedurals, with heart. Brad Lyon uses puns and gallows humor to get through life. And, Brad and Ashleigh are a terrific couple, very much in love after over twenty-five years of marriage. It's a pleasure to read about a married team that respects each other, and enjoys their lives together. I'm going to miss Brad and Ashleigh Lyon.

If this is the last book in the Bear Collector's Mystery series, The Treacherous Teddy takes Brad and Ashleigh Lyon out on a high note. I hope John J. Lamb has success with future books.

FTC Full Disclosure: Library book
Posted by Lesa at 4:00 AM

I'm sorry to hear that! These series are way too short sometimes.

I love gallows humor and the touch of arson adds something different (haven't seen that in a mystery lately.) Thanks, Lesa.

You're welcome, Elizabeth. I was sorry to hear it too, Elizabeth. This series was way too short, and I'll miss it.

If it weren't for you, I never would have heard of this series. I am hitting B&N tomorrow with a birthday gift certificate. A teddybear mystery may just be on my list.

I hope you get one, Kaye. I really enjoyed these books, as you can tell. (smile)

No, I didn't Cindy. Thanks. I'll check it out right now.

I've recently read, and loved, the first two in the series, and am looking forward to "The Crafty Teddy" and "The Clockwork Teddy," both of which I have on hand. "The Treacherous Teddy" is on my Christmas list. You're right, these books are strong police procedurals, not just cozies, and it really is too bad the series is going to end.

Thank you, Sheila. It's good to hear from someone else who has read the books, and understands why these books are so strong. Yes, it's a shame the series is ending. You have some good books ahead of you. Enjoy them!