In Texas in 1958, women weren't supposed to be private 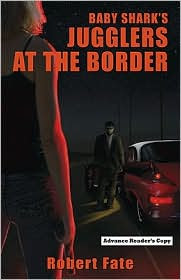 investigators. Women in Texas could be expected to know how to shoot, but they didn't know how to shoot and use knives as skillfully as Kristin Van Dijk. But, Kristin, Baby Shark, has to be able to handle villains, as we see even in the opening scene of Robert Fate's Baby Shark's Jugglers at the Border.

Take that opening scene. "I was on the floor of an old farmhouse, trussed up like a lamb roast, and attached to a rusty iron bedstead by a length of cotton rope. I could see, hear, speak, and smell, but otherwise I was out of commission." Never count Kristin out. She managed to deal with the men who held her captive, meet up with her partner in the detective agency, Otis Millett, and report a few deaths to Lieutenant Carl Lynch from the Fort Worth Police Department. Even Lynch was impressed, and Otis was a legend in Texas, from his years in the Dallas Police Department, and the Otis Millett Agency. That's why Lynch was willing to work with Kristin and Otis on a murder investigation.

It wasn't just any murder case. Otis' estranged wife, Dixie, had been a stripper known as the Dallas Firecracker. She and Otis split when Otis caught her cheating one too many times, but he always carried a torch for her. Now, he and Kristin can do one more thing for her; find her killer. However, it seems as if Dixie might have been mixed up in some recent bank robberies. And, someone is determined to find the loot that Dixie might have hidden.

It's a good thing Kristin has learned to handle herself, because, with Lynch's reluctant help, she goes undercover to try to smoke out the killer. She needs all of her wits and self-defense skills to deal with a man who has no conscience. But, when it comes to helping her partner, and finding a killer, Kristin truly is a Baby Shark.

Baby Shark's Jugglers at the Border is the fourth book in the Baby Shark series. In each book, Fate has revealed a little more about Kristin's feelings, emotions she usually hides in order to be the tough woman she needs to be. This book is no exception, as Kristin shows her feelings for her absent boyfriend, and realizes that her mentor, Henry Chin, is lonely. But, despite the focus on Kristin, this book is actually about Otis. His past is peeled away is this story, and, by the end, he still has important decisions to make.

Kristin and Otis' actions sometimes border on illegal, but Robert Fate makes the reader care deeply about them, along with their friends, Henry, Lt. Lynch, Madame Li. None of them have easy lives, and they live in a violent world in Texas in 1958. Robberies, shoot-outs, murders, beatings are part of their lives. Fate creates a world of vast spaces, violent times, and characters that need to be bigger than life to survive. And, each episode in their lives makes us cheer for them all the more. Kristin and Otis are destined for stardom because they can't be kept on a page. They leap to life from the pages of every story. And, Baby Shark's Jugglers at the Border just adds to the legend of Baby Shark and Otis Millett.

I keep hearing about this series and think I really need to pick up these books. It seems more hard-boiled than my usual reads, but I like the idea of a female protagonist with a tough approach. And it would definitely be an escape from my safe, suburban reality!

These are more hard-boiled than I usually read, Elizabeth. But, I loved the first book, Baby Shark. It felt as if I was cheering for a female Rocky. That book is going to be made into a movie. Not just optioned. Brad Wynans is doing it, and he already has his Baby Shark picked out. These books may seem hard-boiled, and the first book is a little rough on Kristin, but you can't help but fall for her, Henry and Otis.

It's funny that you both mention them being hard-boiled because I was just reading on Fate's website that he considers them "cozies with a few brutal murders." Ha!

This book is my first experience with Baby Shark and I'll be back for more...right after I backtrack to read the first three! :)

Yeah, I wouldn't put them in that category either, Lesa! I got a chuckle out of his comment. I wonder if you're supposed to?? There are a handful of cozies that I really love, but I tend to lean more toward the hard boiled, so I definitely connected with this one. Good stuff!!