Murder at Longbourn by Tracy Kiely 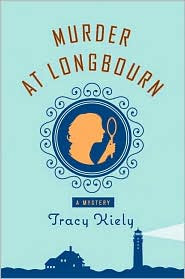 is a treat for anyone who loves those traditional mysteries with a country house setting, and a captive set of characters. Think Agatha Christie, with a contemporary setting, and homage to Jane Austen's Pride and Prejudice. It's a satisfying, cozy mystery.

Elizabeth Parker has just dumped her two-timing boyfriend, so the invitation to spend New Year's Eve at her Aunt Winnie's new bed-and-breakfast in Cape Cod is perfect. And, Aunt Winnie's How-to-Host-a-Murder party sounds fun. But, Elizabeth isn't so happy when she realizes she'll be spending the holiday with Peter McGowan. She remembers Peter as her tormentor when she was a miserable fourteen-year-old, and he was older. She suspects he hasn't even matured, but Aunt Winnie seems to depend on him for help at the inn.

It's an odd group that gathers for New Year's Eve, including the man who is planning to take The Inn at Longbourn from Aunt Winnie, his browbeaten wife, and daughter, the town gossip who is dependant on her wealthy college roommate, an unhappy married couple, and a handsome Englishman. Elizabeth has hopes for that Englishman, but when the murder party ends in actual murder, her hopes for romance crash. Elizabeth only knows she, Peter, and Aunt Winnie didn't kill anyone. As she tells Peter, "I have a brain stuffed with useless bits of knowledge and I'm in the middle of a murder investigation and I don't know what to do anymore."

Murder at Longbourn doesn't lock the characters up in the house, but the small group of people at the New Year's Eve party limits the possibilities for a murderer. And, when the killer strikes a second time, Elizabeth knows the people who love The Inn at Longbourn are in danger. She never set out to be a sleuth, but she's determined to save her aunt, and the bed-and-breakfast.

Elizabeth Parker is an interesting departure from the typical mystery heroine, just as Austen's Elizabeth Bennet was an original character. Parker, as narrator, is brutally honest, dislikes cats, isn't fond of dogs, can't cook, and gets headaches with weather changes. Even so, she's determined to help her aunt, in any way she can.

I have to admit I read Pride and Prejudice years ago, and I'm not a big enough fan to recognize the tributes to that work. I do recognize an enjoyable mystery debut, though. Fans of the traditional country house murder mystery should find Murder at Longbourn completely satisfying as a sample of the genre.

I love mysteries and am always looking for new ones...thanks for adding to the TBR pile.

I adore country house-type mysteries. They're probably my favorite, actually. Murder at Longbourne will be a must.

I love to add to TBR piles, Tina! I hope you enjoy it.

I'm with you, Elizabeth. And, I liked the character in this one, that she wasn't typical. Fun mystery.

Love Austen, love Cape Cod ... this one is going on the TBR pile!

Probably close to the top of the TBR pile if it meets two loves, Clea!