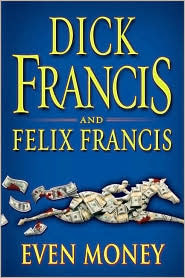 for celebration. Readers knew they would get an exciting fast-paced novel with a likable hero, and, quite often learn something new about wine-making or art. Unfortunately, Francis' latest book, written with his son, Felix, Even Money, is uninspiring and dull.

On the first day of Ascot, Ned Talbot, a bookie, meets a man who claims to be his father, Peter. But Ned had lived with his grandfather since he was one, when he'd been told his father and mother had died in a car crash. Now, thirty-six years later, he's suspicious when a stranger claims to have been living in Australia, but identifies himself as his father. Poor Ned is shocked even more when he and Peter are attacked in the parking lot, and the man who leaves Peter for dead had demanded "the money." For some reason, Ned feels he needs to keep that story from the police when they show up to investigate.

Ned's life is now even more complicated. A bookie's life is never easy, although there have been some recent incidents at the track when the Internet and cell phones went down, and he and his team were able to make a little money. But, the big bookmaking companies aren't happy, and they feel as if some small bookies know what's going on. In addition, Ned's wife, Sophie, a manic-depressive, is hospitalized, hoping to be released. His work and personal life are complicated enough, without adding an investigation into the background of the dead man, who might have been a little shady.

Instead of providing the reader with an interesting new background for the hero, Francis gives so much detail about bookmaking and RFID chips in horses that the book is slow-moving and dull. Ned is not even a very sympathetic character. His motives never seemed very heroic in this book. Instead, he seemed to be motivated by revenge and money.

I doubt that I'll be picking up another book by Dick Francis. Even Money was too lacking. It lacked an exciting plot and an interesting hero. It lacks suspense. I'm afraid it's also going to be lacking in reading interest for many of Francis' past readers.

The website for Dick Francis and Felix Francis is www.dickfrancis.com.

Francis is another writer whose earlier books I once enjoyed but have given up on in recent years.

I can understand why, Caite. This one just didn't have anything to bring a reader back, except for Dick Francis' name.

Sounds like he's sharing a little too much of his extensive research with his readers! Not fun.

You're right, Elizabeth. I know way more about being a bookie than I expected to after reading this.

You're right about there being too much about bookmaking in this book. But I did think that Sophie was much more human than the women in most of the other Francis books, and I thought this was a better book than their last collaboration.

Oh this is sad. I guess he should have quit while he was ahead.

Interesting. I didn't read their last collaboration, and I know I won't, if you say this one was better. I just found this one too detailed and boring.

I think you're right, Clea. I think he should have quit when he said he was going to after his wife's death.

Dick Francis has Written forty-one international bestsellers and is widely acclaimed as one of the world's finest thriller writers. This paragraph above says more about Dick Francis the writer, and the man, than any of the trash comments on your website, to even think of mentioning his family loss, in your comments, is totally unprofessional, when you boast of having had only a partial glimpse or have you even read any of his many books or appreciated his talent for writing at all, then and only then should you be able to critise him. For myself I am a major fan, and a collector of many authors.

just read the book, ive read eveything Dick has produced so far. From the start i could feel that something had changed , ive allways loved the lead in the books ,, they made me want to be a better, smarter, more understanding person. this may seem corney but there you are. the style was differant but still a good book that will be passed to my dad. dont tell my dad about the corny stuff.

Thanks for commenting, saying you thought something had changed, although you've read all of Dick Francis' books. In return, I promise not to tell your father about the corny stuff! (grin) I think it's very nice.