City of Refuge by Tom Piazza 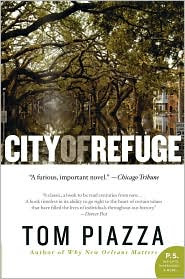 with the third anniversary of Hurricane Katrina. The trade paperback just came out last month, with the fourth anniversary. No matter when you read the book, it's a heartbreaking story of a beautiful city, the people who loved it, lost it, and found a way to love it again.

Piazza follows two families to tell the story of the hurricane, and it's destruction. SJ Williams, his sister, Lucy, and his nephew, Wesley, are a black family living in the Ninth Ward, surrounded by friends and memories of family. SJ is a carpenter, with a small business. Lucy is diabetic, and, over the years, has used coke and alcohol. Wesley is a teenager on the verge of trouble.

There are only two points in the book when SJ's life intersects with Craig Donaldson. Craig is the white editor of Gumbo magazine. No one loved New Orleans more than he did, but his wife, Alice, was beginning to feel uneasy about raising their two children in the city. Craig was a romantic who loved the magic of the city, the music, the romance, and it was home.

But, Hurricane Katrinia tore apart the lives of New Orleans' people. Even those who were able to escape, like the Donaldsons, found themselves caught in traffic, sleeping in lounge chairs by swimming pools, and bunking with family members in small rooms. They watched the news reports of their city, and listened to broadcasters who said the city called ruin upon itself. And, even though they found places to stay, those places were not New Orleans.

In contrast, there were the people unable and unwilling to leave. SJ couldn't find his nephew. His sister, Lucy, needed medications, and knew no other life other than the one they had. SJ's business, and the memories of his wife, were in New Orleans. He and Lucy found themselves caught in the flood when the levees broke, until the self-sufficient SJ was able to find a dinghy and get them out. When SJ went back to help others, he lost his family, while Lucy found herself in the Convention Center.

Piazza's novel brilliantly captures the media coverage of the tragedy, but he digs in deeper to tell of the pain and shock of the individuals. They may have been removed to Chicago or Houston, but each person left a part of their heart behind. And, each person grieved in their own time. At times, Craig, who found himself working in Chicago, couldn't accept that life was going on around him. He saw people "going on as if life hadn't been interrupted, as if the greatest single forced migration in American history, since the Dust Bowl, hadn't just happened."

I've read other books about the aftermath of Hurricane Katrina, and the storm itself. But, no one makes it as personal as Tom Piazza. He shows the broken souls, the displaced people who want to go back, but, sometimes just can't. There's quite a difference in the decisions made by Craig and SJ, but both men were compelled to make those decisions, knowing that life had to go on.

City of Refuge is a powerful book, a story that puts a face on the loss of community and life in New Orleans. There's anger at the loss in the city, but Piazza's poet's soul tells of music and life that goes on. New Orleans may have been knocked down, and shrunk, but its people carry the life of the city with them. If you want to understand what happened to the people of New Orleans, try City of Refuge.

It sounds like the city of New Orleans is a character in the book, too! I love books like that. Craig and SJ, although their lives were very different, both loved their hometown.

You're welcome, Elizabeth. It's a terrific book. I know I keep adding books to your TBR pile, and you have a busy life, but this one is worth trying.

Great review, Lesa! Hurricane Katrina affected so many lives directly, and it's the personal stories of the victims (even these fictional ones) that bring the most understanding to the rest of us.

Thanks so much for the time spent reading and reviewing City of Refuge. It is much appreciated!

Thanks, again, Lisa, for sending it to me. I would have missed this terrific book, if you hadn't sent it.

This sounds like a very intimate look into the lives of those who were affected by Katrina. Great review!

Thanks, Wendy! It's a fascinating novel, but very realistic.

New Orleans is a city that has survived so much through the years. This book sounds great!

Thanks, everyone, for the nice comments about the review. If you liked the review, try the book!