Shades of Grey by Clea Simon 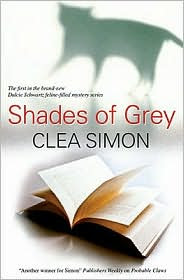 No one but Dulcie Schwartz may ever see the ghost of her cat, Mr Grey, but thank heavens the grad student sees him. She needs all the help she can get in Clea Simon's new mystery, Shades of Grey.

Dulcie in truly an innocent young woman. She's a grad student at Harvard, a student of Gothic romances trying to find her thesis topic. Mentally, she dwells in that world, while working as a temp at an insurance company. She isn't prepared to find her summer roommate's body in the apartment when she arrives home. But, a cat that looked like Mr Grey tried to warn her not to enter the apartment. She just thought her grief had become too much for her. Instead, she found Tim's body at a time she was mad at him. Suddenly, she's a suspect in the murder of a young, wealthy man she didn't like.

Dulcie isn't prepared to be a suspect. She isn't even prepared for life, spending too many years growing up in arts colonies with her mother, a hippie. She doesn't know how to dress for a funeral; she sees so many men as potential romantic interests; and she tells too many people, including the police, about her suspicions about Tim's activities that may have led to his death. She doesn't even understand that she's being set up for a fall at the insurance company, when suddenly there are computer problems. Thank heavens, Dulcie has Mr Grey, and a few other friends, to look out for her, since she so innocent as to the reality of life.

Computers and murder seem way beyond Dulcie's skills, to anyone but the police, and a murderer. For anyone familiar with Clea Simon's Theda Krakow mysteries, Dulcie is a surprise. She's an innocent dreamer, unprepared for life. But Theda could have been like that before she become hardened by life. But, both characters are bright enough to find a killer. And, both share a love of cats.

The slow paced mystery, Shades of Grey, is perfect for the romantic Dulcie and the ghost of a cat. It has a little too much emphasis on Dulcie's romantic literature for my taste, but that depth of knowledge is worthy of the character. . It's a ghostly mystery, intended to keep the heroine confused and unsure about her friends. But, she can always count on Mr Grey. Shades of Grey is a mystery for the slow fall days almost upon us.

I like the idea of a very naive murder suspect who isn't wise to the ways of the world. Very different. And the premise of Dulcie's involvement in the case sounds good....she's a suspect, trying to clear her name.

Thanks for the review, Lesa!

Thank you, Lesa!
Of course, I don't see Dulcie as "innocent." She's simply booksmart, rather than life smart. And she does pick good friends!
Clea

Another author I have not heard of...more books that I must check out and look, she commented just before me...lol

The look sounds interesting. I am not really a cat person but they are starting to grow on me. Still, if a ghost was going to help me with a murder, I might like one that could speak, give me a few clues.

ok, I take that back since it seems, after reading the first chapter on Ms. Simon's website, that this cat does speak if not actually talk..

You're welcome, Elizabeth. And, Clea will answer some questions about the book, the character, and the ghost tomorrow here on my blog.

Thanks, Clea. I still see Dulcie as innocent, but she'll learn!

And, Clea will answer questions tomorrow, Caite, about that talking ghost!

I loved this book and I'm looking forward to "Grey Matters," the next one in the series.

I really enjoyed the Dulcie character - she's different from the usual female protagonists in murder mysteries, and I'm looking forward to watching her character develop as the series goes on. Clea Simon has demonstrated the art of character development so masterfully in the Theda Krakow series, I know it's going to be wonderful in this series, too.

And of course, there's the cat - which, to me, makes it a perfect book!

Thank you. It's so nice to hear the viewpoint of someone else who read it. I'm glad you follow both series, so you can comment on them.

Thanks everyone! And yup, Lesa has my interview already - and I'll be around to answer additional questions, too.

As Caite already noticed, I have the first chapter up on my website, in case anyone wants to sample it.

This book sounded interesting. I've put it on my list. Thanks.

Thank you, Joe. Is your list as long as mine? (sigh) I'll never get to everything I want to read.