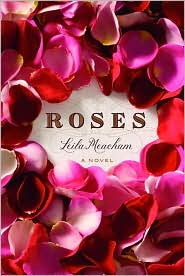 It's actually a little early to review Leila Meacham's Roses, but I understand it was one of the hottest Advanced Reading Copies at BEA this year. This is the reprint of my starred review from the Aug. 15 issue of Library Journal, reprinted with permission.

It's been almost 30 years since the heyday of giant epics in the grand tradition of Edna Ferber and Barbara Taylor Bradford, but Meacham's debut might bring them back. This story of two founding families in a small East Texas town spans the 20th century. When Mary Toliver inherits her family's cotton plantation, Somerset, in 1916, it tears apart her family; her mother turns to alcohol, and her brother leaves. Mary's obsession with Somerset even causes her to lose the love of her life, timber magnate Percy Warwick. By the time she's 85, Mary is determined that the family curse will not continue and, despite her grandniece's love of Somerset, plans for the plantation to be sold after her death. Mary Toliver and Percy Warwick can't share anything more than friendship, but Mary's actions might allow Rachel to see past Somerset to the man who loves her. VERDICT Readers who like an old-fashioned saga will devour this sprawling novel of passion and revenge. Highly recommended.—

Copyright © 2009 Cahners Business Information, a division of Reed Elsevier Inc. Reprinted with permission.
Posted by Lesa at 4:00 AM

I haven't read an epic in forever! And...at 624 pages, it takes a great review like yours for me to pick this one up. But I love epics that are well-done...

I actually picked this up at BEA - glad to see it's so good.

Sounds fabulous. I love the family saga type book. A really good one is Penny Vincenzi's trilogy starting with No Angel followed by Something Dangerous. For the life of me I can't remember the title of the third but the books start during WWI and continue for another 70 years or so. Thanks for the heads up on this one. It's on the list!

Ah, Elizabeth. I know you're much younger than me, so you don't remember the heyday of the giant epic. I agree with you. I'm not into the enormous books,usually. (I can read 3 others in the same time.) But, this is a good one, and it least it only has to go on a list right now.

So,you already have it, Bermudaonion. It's the type that will make for good winter reading, if you have the type of weather that shuts you in. (Not here in AZ.)

So, Penny Vincenzi is writing those family sagas now. Did you ever read Elswyth Thane's Williamsburg books? Now, those were even before my time, published originally in the 40s and 50s. But, my mother, grandmother and I all read them in the 70s. Terrific series.

I love family epics that span decades if they're well written, especially if they're the kind that you don't want to end no matter how long it is. This sounds like a good one. It's definitely going on my to be read list!

And, while you're waiting for this one, Ingrid, have you read Elswyth Thane? I know I sound like a broken record, but that series spans the American Revolution to WWII.

Roses seemed so one dimensional comparied to the Williamsburg Novels of Elswyth Thane! For those who have not read them, start with Dawn's Early Light which is set just before and during the Revolutionary War in Williamsburg, Virginia.

Oh, I'll admit, CLM, I loved Elswyth Thane's Williamsburg novels. And, my mother and grandmother loved them, too. Definitely worth finding, if you haven't read them.