You can't believe how excited I was when I was asked 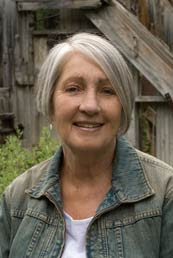 if I'd like to interview Sandra Dallas. I have loved her books since I read The Persian Pickle Club. And, each one of her books has been special. I hope you enjoy this interview as much as I did.

Lesa - Thank you, Sandra, for taking time to answer questions. I’ve been a fan of yours for years, beginning with The Persian Pickle Club, but I don’t know much about you. Would you introduce yourself to my readers?

Sandra - I was a journalist with Business Week Magazine for 35 years and the magazine’s first female bureau chief, in Denver. I wrote nine nonfiction books, mostly on Colorado history and always thought I’d write significant books about the West, you know, explaining water policy and land use. Instead, I turned to fiction, publishing my first novel, Buster Midnight’s Café, about 20 years ago.

Lesa - What brought you to writing, and particularly to telling the stories of women?

Sandra - I never wanted to be anything but a writer. Well, actually, that’s not true. I wanted to be a movie star, but I tried out for the high school play and immediately went to Plan B, which was writing. I studied journalism at the University of Denver, not creative writing. I’d never planned to write fiction—I didn’t even read it—and turned to it as a fluke when two friends and I decided to write a steamy novel. That didn’t work, but I learned that I loved writing fiction. As for stories of women, they are what come out when I write. I thought I was writing an historic novel when I wrote my first work of fiction, Buster Midnight’s Café, but when it was published, readers told me that it was a story of loyalty and friendship. That is not something I plan, but it is what emerges when I sit down at the computer. I have to say that I don’t understand the creative process, but I’ve learned to trust it. 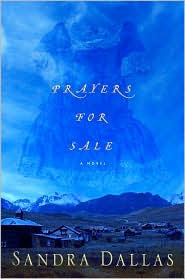 to the Depression. Would you tell us about it?

Sandra - Prayers for Sale is the story of a friendship between two women, Hennie, who is 86, and Nit, 17. Hennie has lived in Middle Swan, Colo., a gold dredging town in the Rockies, for 70 years, while Nit is a newcomer who is hurting from the loss of her baby. Hennie takes the girl under her wing and in helping her heal, Hennie tells stories about Middle Swan. But the stories are really about Hennie and her life, the hardships and joys and one unresolved issue with which she must come to terms.

Lesa - I’ve read all of your books, but my favorites are Prayers for Sale, Tallgrass, and The Persian Pickle Club. Do you have a favorite book or
character, and why is it your favorite?

Sandra - The Diary of Mattie Spenser was always my favorite, but I think it’s been replaced by Prayers for Sale. Incidentally, Tom Earley, is a character in both books. In fact, characters from virtually all of my other books have walk-on roles in Prayers for Sale.

Lesa - Since the women in my family have made family quilts, I noticed the
the importance of quilting in most of your books. If it’s not a major part
of the story, as in Prayers for Sale and The Persian Pickle Club, it still has a minor role, such as in Tallgrass. Can you tell us about the role of quilting in your life?

Sandra - I taught myself to quilt when my daughters were babies, although I have to say I’m a poor quilter and rarely quilt anymore. But I collect old quilts. I love them as women’s art and symbols of women’s lives. I love the closeness of quilting circles, the friendships that develop over a needle. And as a writer, you can do so much with quilting—have a character hold the needle far away to thread it, lick the thread, prick herself. The colors a woman chooses for her quilt identify her. So does her stitching. A woman who takes big sloppy stitches is different from who takes small even stitches.

Lesa -A number of your books are set in the Depression. Is there a reason you’re interested in that time period?

Sandra - I have trouble dealing with modern technology, so you’ll never see me writing about cell phones and ipods. I was born after the Great Depression, but because my parents had such a difficult time during those years, I was brought up with a sort of depression orientation: pay your bills, pay off the mortgage, save your money, hard times could come again. The Persian Pickle Club, my second novel, was set during that time period because the book is based on an incident in my parents’ lives. And I just liked writing about that era. Of course, there’s all that wonderful stuff—depression glass, girdles, gasoline stations with glass-top pumps, cars with running boards.

Lesa - Would you tell us what you’re working on now?

Sandra - My upcoming novel is Whiter Than Snow, which is set in Swandyke, a mining town on the Swan River not far from Middle Swan in Prayers for Sale. In the spring of 1920, an avalanche thunders down a mountain, sweeping up nine children walking home from school. Four of them live. The book tells the stories of the families of these children. Whiter Than Snow (a Biblical reference) will be published next spring.

Lesa - Before I ask my final question, is there anything you would like to discuss that I might have missed?

Sandra - Your questions are comprehensive. One thing I loved about writing the book was writing the dialogue. Many of the expressions are snippets of mining town conversations that were captured by Helen Rich, an elderly writer who lived in Breckenridge, Colo., from the 1940s to the 1970s. Helen mentored me long before mentor was a verb. Others expressions came from slang books, from reading period newspaper, and from my own recollection of living in Breckenridge in the early 1960s. Middle Swan, incidentally, is based on Breckenridge.

Lesa - Thank you, Sandra. My final question is one I always ask. I’m a public librarian. Do you have any special memories or comments about libraries?

Sandra - Are you kidding! I am a writer because of librarians. I practically grew up in the Park Hill Branch of the Denver Public Library. When I was eight or nine, I passed out in front of the circulation desk and came to with everyone in the library standing around me. It remains one of the highlights of my life.

But I have a more serious connection with libraries. My older sister, Donna Kay, died of polio at the age of 13, in 1948. My mother started a library at our church in her memory. Mother, who’d never gone to college, became a self-taught librarian. She pioneered techniques that were picked up by church libraries all over the country. In 2001, just two weeks before her death, she was given an award for her work by the association of church and synagogue libraries.

Lesa -Thank you, Sandra, for giving me the opportunity to interview you. It's been such a pleasure! And, I'm looking forward now to reading Whiter Than Snow!

I'm excited to have found a new series to read! Lesa's review yesterday was glowing and I really enjoyed the interview.

Quilting has always appealed to me, too. I love the idea of the stories embedded in the fabric. Like you, though, I think I'll focus on collecting them instead of trying to make my own.

Thank you, Elizabeth. When you finally read some of Sandra Dallas' books, I'd love to know what you think.

Thanks for this chance to get to know Sandra Dallas a little better, Lesa. She's such a good writer. Hmmm. Didn't I say that yesterday as well? Must be true...

I think it is true, Patricia, that she's such a good writer. I'm glad I had the opportunity to interview her!

Great interview! Thank you, Lesa. I'm glad Patricia Stoltey sent a tweet out about it. Sandra Dallas is one of my favorites along with a whole gaggle of women at the library where I work. Can't keep her new books on the shelf.

I must agree with Sandra, Prayers For Sale is my new favorite. Love the mining camp setting. And, I'm glad she mentioned where she found the phrases and slang used in the book. So much fun!

Can't wait to share this interview with my friends.

Thanks for sharing a great interview. I love Sandra's books, and I can't wait to read this one. And the next one...

Thank you! That was so nice of Patricia to tweet about the review. Like you, I'm a fan of Sandra Dallas' books. And, they just seem to continue to get better. I'm looking forward to the next one.

I think it was one of the better interviews. It helps to have an author willing to contribute to the interview, and it didn't hurt I had read so many of her books.

Tomorrow's interview is really a fun one! Watch for it. It's a little different.

Thank you for interviewing Sandra Dallas! I thoroughly enjoyed it. I have felt for many years that just not enough people have read her books and I make it a point to suggest them to patrons. We read TALLGRASS as part of a group of books for our July Book Club and the ladies that selected it enjoyed it very much. I have not had a chance to read PRAYERS FOR SALE yet, but I will be picking it up soon. I have been a fan from way, way back!!

You're welcome, Kay. Definitely my pleasure. I don't know why she has been overlooked, but I feel she hasn't received the attention she deserves. I'm with you, a fan from way, way back!

Great interview, and I'm so happy to hear about Whiter Than Snow coming out next year!

I do consider myself lucky, Julie. Thank you. Someday, I hope to hear her in person.

Me, too! Looking forward to Whiter Than Snow. Sounds tragic. But, I know Sandra Dallas can do something marvelous with it.

Great interview. She's a great writer and, now a see, an admirable person as well. I will definitely read Prayers For Sale.

Oh, Margot. Since you're "Joyfully Retired," you should take the time to read this book. You'll feel even happier when you finish it.