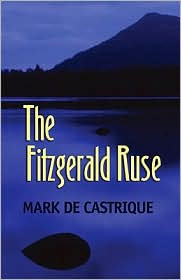 Mark de Castrique's Blackman's Coffin introduced a fascinating new character, Former Chief Warrant Officer Sam Blackman, a man who lost a leg in Iraq, and, after being sent to a V.A. hospital in Asheville, North Carolina, investigated the murder of a new acquaintance, and a connection to Thomas Wolfe. The story was fresh, and the characters original. The second book, The Fitzgerald Ruse, felt flat in comparison.

Sam and his new business partner and girlfriend, Nakayla Robertson, are just opening their office as private investigators when an old friend at Golden Oaks Retirement Center calls and asks them to meet with Ethel Barkley. Ethel claims to have betrayed F. Scott Fitzgerald over seventy-five years earlier, and asks Sam to retrieve a lockbox from the bank for her. Before he can take the box to his new client, he finds a security guard killed in his office, and another murder occurs. When an old friend from Sam's past in Iraq appears, claiming the two men are targets of rogue mercenaries once employed by Blackwater, Sam is unsure where to turn for answers. Do the murders relate to the lockbox, with a swastika seal, that was stolen from his office at the time of the security guard's death? Or, is someone after Sam?

The Fitzgerald Ruse has too many characters, unlikely storylines, murders that rely on timing. I still like Sam and Nakayla, and I'll read the next book in the series. But, I was disappointed that the final resolution had less to do with F. Scott Fitzgerald than the title and opening suggested. Other readers may not find this mystery quite as cluttered as I did. Mark de Castrique's The Fitzgerald Ruse just left me feeling dissatisfied.

I love the idea of incorporating Fitzgerald into a book. I'm sorry that he didn't include as many references to him as he could have. I also tend to avoid books with a lot of characters (gets too confusing for me since I have to pick up and put down books so many times!)

Perhaps that was my biggest problem, Elizabeth. Like you, I read books in spurts, and this one had a large cast, with two plotlines that came together.