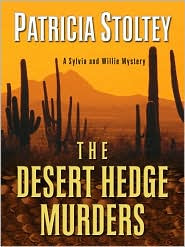 former judge to accompany her mother's travel club to Laughlin, Nevada and Oatman, Arizona. Sylvia Thorn was a reluctant recruit to her mother's trip. But, it will only get worse in this mystery, reminiscent of the Keystone Cops, The Desert Hedge Murders by Patricia Stoltey.

How could Sylvia ever expect to keep tabs on the Florida Flippers, a group of seventy and eighty year old women? They're independent, opinionated, and out of control. And, it only makes it worse when Sandra Pringle finds a body in her bathtub, soon after check-in at the hotel in Laughlin. While the Florida Flippers are excited about the body, and want to investigate the murder, Sylvia suspects Sandra and her roommate, Patsy, know a little more about the dead man than they're letting on. It only takes one evening of the Flippers running around the casino, asking questions, for Sandra to take the opportunity to slip away from the group.

Patsy's stories about Sandra's whereabouts are a little suspicious, but the Flippers' vacation plans aren't squashed by Sandra's absence. The women all board the bus to Oatman, Arizona, anticipating their visit to the ghost town. But, their tour of the Lone Cactus Gold Mine is disrupted by a grisly discovery. Between the dead man, and the tour group's problems, Sylvia suspects the Flippers might be in danger. A visit from an FBI agent confirms there's something more involved than a suspicious death. Sylvia may think something is wrong. The Flippers see it as more to investigate, getting in the way of the police and FBI as they scatter all over.

Back in Florida, Sylvia's brother, Willie, knows his sister is in trouble. After his experiences in Vietnam, Willie suffers from Post Traumatic Stress Disorder. But, he is also psychic. His comments to his octogenarian father, Peter, and their inability to reach Sylvia, sets the two men on a wild-goose chase. After flying into Las Vegas, they team up with an old friend of Peter's from World War II. A trip in an old motorcycle sidecar on Old Route 66 isn't quite what Willie had in mind when he knew he needed to reach his sister.

Since the Flippers need to return to Oatman a couple times, Stoltey has the opportunity to capture the town with all of its charms. She includes the ghost stories, the hotel and restaurant, the old gold mine. Sylvia's reaction to the wild burros that actually roam the streets is priceless. She feels quite threatened by the animals. So much of the town is included in the story, including Oatie the Ghost, and the Gable/Lombard honeymoon suite.

Stoltey's madcap mystery is highlighted by the odd group of seniors. Sylvia's mother is right. The former judge comes across as too prim and stuffy. She needs to loosen up. The Flippers could manage do that for her. Poor Sylvia. Trying to keep tabs on them is as hard as trying to herd Oatman's wild burros. Willie, with his lovable quirks, is a more likable character. The Florida Flippers, and the motorcycle ride from Las Vegas to Oatman, add humor to a complicated story. The Desert Hedge Murders is called "A Sylvia and Willie Mystery". Sylvia is overshadowed by the Florida Flippers and Willie. But, the ending leaves possibilities for future adventures for the brother and sister. Sylvia's already an avid fan of mysteries. If she learns to loosen up, she might even enjoy future cases.

Thanks for a very perceptive and well-done review, Lesa. You're right about Sylvia. Her best friend, outspoken acupuncturist Tak Picon, is doing her best to loosen Sylvia up and bring out her inner Latina (seen a little in the The Prairie Grass Murders), but Sylvia's a tough case. We'll work harder on making that happen.

You're welcome, Patricia! I did like that comment from Tak about her inner Latina. She'll get there, I'm sure. And, Willie's a doll! I love her parents as well.

And, since I lived in Florida and Arizona, I loved both settings. But, how many people are strange like me, and lived both places?

I lived in Florida 11 years, but my connection with Arizona is through my son and daughter-in-law who live in (can you guess?) Oatman. I really love that place (and I like the burros a lot more than Sylvia does).

I had never heard of Oatman before your book, Patricia, but now I want to go! I want to see the burros. Like the librarian I am, I looked it up while reading your book, only to find everything you said about the ghosts and the burros was true!