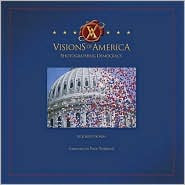 I can't remember when I've had the chance to review a book that was so perfect to share with readers of Sunday Salon. Joseph Sohm's stunning Visions of America: Photographing Democracy is his view of the United States. There are over 1300 photographs and twenty-one essays in a book that leaves the reader in awe of the beauty of this country, and its people.

Sohm spent thirty years on this book, a celebration 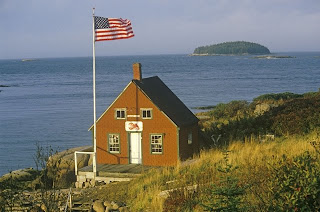 of American democracy, not our politics, but the freedom we have to celebrate our diversity. This book celebrates who we are as a people, and where we came from. Sohm honors everyone in this book, and each state and corner of the country. He wanted to "understand our past and how it impacts our future".

To try to understand this country, Sohm divided the book into thirteen themes, and each one of those themes is beautifully exemplified by his gorgeous photographs. Sohm, who once taught American History, considers himself a photo-historian. With that background, he's the perfect person to devote thirty years to telling our story. His themes include, "In Pursuit of Happiness", "Native America - Peoples, 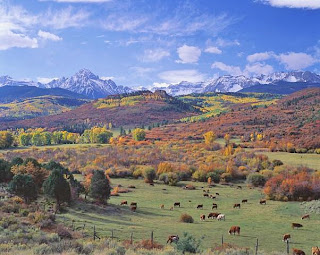 Landscapes and Animals", "From Africa to America - Red White BLACK". Sohm covers the roots of our country, showing reenactors. He takes us to farms, small towns, and cities.

Although Sohm's photographs celebrate the beauty of the country and its people, he isn't blind. He doesn't hesitate to show us the worst of ourselves, the LA riots, the homeless, the pollution, the endangered animals. He talks about global warming, and our challenges as we continue to grow as a country.

But, I have two favorite sections of the book. "Welcome to America" takes us to all fifty states, showing our state capitols, our flags, and our welcome signs. And, the section, "Avenue of the America: Building Castles in the Sky", shows the skylines of our cities.

This book is just one part of a multi-media package that Sohm wrote, photographed, and produced, "Photo Symphony Concert for America". It premiered in Philadelphia with Peter Nero conducting the Philadelphia Pops just after President Obama's Inauguration. Sohm's story of his journey to photograph democracy was read by Clint Eastwood, and it will soon be available on Sohm's website.

"Visions of America recently won the Gold Medal (IPPY) for the 13th annual Independent Book Publishers Award for best coffee tabletop book," according to the letter I received from Sohm. Deservedly so. Sohm spent thirty years trying to photograph every corner of this country, to tell our story.

After photographing landscapes, cities, our small towns and farms, our people, and our sporting events, Sohm felt as if he was missing something. And, he said he realized he was missing the element that ties us together as a country. What unites us is our voting. Three hundred million people unite to vote. It's part of the ritual that makes us a country.

Sohm's Visions of America is a magnificent tribute to this country. It's a wonderful legacy he'll leave as his life's work. If you've been lucky enough to see so many parts of this country, as I have, it will bring back memories. If you haven't had that opportunity, Sohm willingly shares his photographs. My blog doesn't do justice to the photographs I was able to share with you, with Sohm's permission. Check out his website to see a video and more photographs. Better yet, pick up a copy of Visions of America: Photographing Democracy. 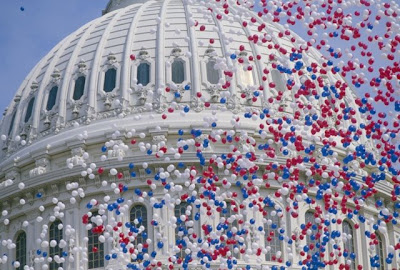 This certainly looks stunning. There used to be (still is?) and English artist called David Gentleman who published books of his paintings of various parts of Britain that excited me as much as this book has clearly excited you. What i find fascinating is the choices that these people make. Why those particular images and not others, I wonder?

This is definitely the type of book I would love to see. I am presently reading America by Stephen Fry, which is full of photographs of his travels around America. He visited all the states and looked for the weird and the wonderful whilst on his travels.

That's a good question, Table Top. I know Sohm sais he spent days sometimes trying to get the right shot, with the lighting he wanted. He went back year after year for the LA Marathon, getting turned away from where he wanted to photograph the start of the race. It must just be that vision - what they wanted to capture and share.

Fry's book sounds wonderful, Scrap Girl, with the "weird and the wonderful". I'll have to look for it. Thanks for mentioning it!

I'll admit I usually think of coffee table books as being beautiful but shallow, content-wise. This book sounds like it has a bit of photo-journalism to it...I'll look for it at the store.

Sounds like a wonderful book! I'm going to have to check this one out.

This sounds wonderful Thanks for bringing it to my attention.

Yes, Elizabeth, this one does have a great deal of material in it, along with the photos. Much more than many coffee table books.

SmallWorld at Home and Joanne - You're both welcome. It's a beautiful book.

I have a lovely collection of coffee table books that friends and guests enjoy. This seems absolutely perfect for that purpose.

Oh, that's nice, Jacqueline. I'm sure it would be a conversation starter.