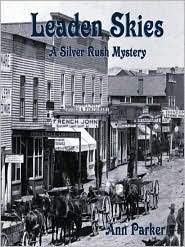 Who would expect that Sunday Salon would find me discussing bordellos, politics, saloons and murder? But, Ann Parker's new book, Leaden Skies, takes readers back to Leadville, Colorado, and Inez Stannert's world in 1880.

Leaden Skies follows hard on the heels of Parker's Iron Ties. Former U.S. President and Civil War general Ulysses S. Grant has arrived in Leadville, and it seems as if half the town of 30,000 turned out to welcome him, including someone who tried to assassinate him, since the former general isn't popular with some of the southerners who moved to Leadville after the war. But, Inez Stannert, owner of the Silver Queen Saloon, made her way in the mud and the muck to see him arrive by train. When the gun and fireworks go off, Inez loses control of her horse, and almost runs over a surveyor and mapmaker, Cecil Farnesworth. But, she's easily distracted when she sees a fire on State Street, where her saloon, and a bordello are located.

That fire is just the first of Inez' problems. The dark clouds that hang over the city during Grant's visit seem to hang over Inez' life right now. With her husband missing for a year, she's ready to file for divorce. And, the whole issue with her husband leaves her in limbo. She's uncertain about her share in the business, worried about the divorce, and yearning for her two-year-old son, living in the east with her sister. When she tries to make a business deal with Flo, the owner of the bordello, hoping to buy her property, Inez Stannert makes a deal with the devil, a deal that only leads to more trouble, as Flo is arrested, one of her girls in murdered, and another girl becomes a suspect. And, the trouble just seems to swirl around Inez. Even when she tries to help her lover, Reverend Sands, she puts herself in more danger, catching the attention of a policeman.

Ann Parker packs a great deal of social history into a mystery. Leadville, Colorado is a growing town in 1880, involved in politics, mining, and, even the suffragette movement. It's a mining town in which the saloons and bordellos play host to the men from the mines, as well as visiting dignitaries. And, it's a culture in which women who want to be independent business owners don't have a great deal of choices. Even when they hope to become independent, they still must deal with the powerful men who control the town.

Readers should really go back and read the previous two books in the Silver Rush mystery series, Silver Lies and Iron Ties. Most of us aren't familiar with this post-Civil War part of our history in the West. And, it's a fascinating part of our history. Parker skillfully, and vividly, portrays it. The Silver Rush in Colorado brought all kinds of people to Leadville, saints and sinners. And, they were all trying to make a killing of some sort. Parker's book is intriguing, both as a mystery, and, as a social history.

Once you've read these three books, pick up Vicki Delany's Gold Digger, and compare the lives of the two saloon owners, Inez Stannert during Leadville's mining days, and Fiona MacGillivray's during the gold rush in Dawson, Yukon Territory in 1898. The authors gave us two strong women, trying to make a living in a man's world. However, Inez Stannert is due for a break sooner or later, and it doesn't appear to be sooner. Ann Parker's character seems doomed to live her life under Leaden Skies.

There is a downloadable copy of the Author's Note that was omitted in the first printing. If you'd like to read it, go to http://www.annparker.net/book.htm, and click on "Click to read the Author's Note."

Ann Parker will appear at the Velma Teague Library on Saturday, Aug. 15 at 2 PM, with authors Sophie Littlefield (A Bad Day for Sorry) and Juliet Blackwell (Secondhand Spirits). They'll discuss Strong Heroines in Crime Fiction.
Posted by Lesa at 4:00 AM

I've been on vacation, and am just catching up on such things as various blogs. Can you believe I did NOT take enough books with me -- it was horrible! I snagged one from one of my daughters, which saved the day. No stores around...

This book sounds quite interesting -- I've always enjoyed reading about the Gold Rush in California, and I like the thought of learning about the Silver Rush, as well. (One of my all-time favorite books, by the way, is on the Gold Rush -- "Calico Palace," by Gwen Bristow. I think it was published in the early '70s. It's an oldie but a goodie!)

I want to recommend a different novel, based on real life, with some great romance and suspense involved as well -- Shooting an Albatross by Steven Lundin. It's set in wartime HOllywood, in 1943, when an Army battalion takes over an LA golf course. Golf, friendly fire, murder -- it all mixes up together for a great read!

I'm with you. Calico Palice was a good one. Thanks for the recommendation. You're right - golf, friendly fire, and murder sounds like an intriguing combination.

Hello Lesa,
Thank you for the wonderful review! I'm looking forward to the library event with Sophie Littlefield and Juliet Blackwell. We're going to have a LOT of fun!
And Liz: The Gold Rush period is also of interest to me ... Thanks for mentioning Calico Palace. I'm going to check it out as soon as I get a chance.

You're welcome, Ann. I'm looking forward to the library event!

Thanks for this, Lesa! I love Vicki Delany's books and so I'm very interested in reading this as a companion - and I was curious to hear that Poisoned Pen left out her author's note, too. My acknowledgments never made it into Probable Claws, which was somewhat embarrassing considering all the folks I had to thank!

You're welcome, Clea. Ann said the author's note was left out of the first printing. It must have made it into the second one. Ann Parker's books do make for interesting companions to Vicki Delany's Gold Digger.

this site welcomes everyone all over the world because of its lovely colour and the colour is so magnifitious.