A Slice of Murder by Chris Cavender 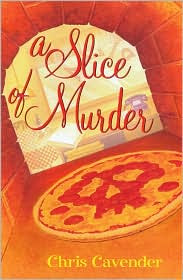 A Slice of Murder, and it's a saucy debut. The two main characters are fun together; there's a vast selection of possible villains, and it's a small town cozy mystery. It has all the ingredients needed for an enjoyable treat.

Eleanor Swift is a widow who owns a pizzeria in a small town, Timber Ridge, North Carolina. With the help of her sister, Maddy, she makes pizza, buses tables, and, when her staff fails to show up, even delivers pizza. Unfortunately, it was a pizza delivery that put her in hot water. One night, she took a pizza to a house where she found a body. She immediately called 911, but, since she had publicly slapped the victim, the chief of police, Kevin Hurley, thought she was the perfect suspect. It didn't help that she had dated Hurley in high school. In fact, it came as an added insult when he told his son he couldn't continue to work at the pizzeria.

When Eleanor feels her restaurant is threatened, she falls in with Maddy's scheme to investigate the murder. Maddy, who devours mysteries, feels they know enough of the gossip and people in Timber Ridge to find the killer. It's a small town, with a number of people who had reason to kill the victim, from the mayor and his wife, to the victim's neighbor and sister. So, which of those suspects is shooting at Eleanor?

A Slice of Murder is a promising start to a new mystery series. Eleanor and Maddy are mature characters, sisters who are supportive of each other, which is a welcome departure from many mysteries. Eleanor has some problems getting close to people. "Since my widowhood, I'd become fiercely independent, almost too proud or stubborn to take help from anyone else." But, Maddy keeps her grounded. Although Maddy has been married four or five times, she's the one with a sense of humor, the one who insists on calling the police for help.

A Slice of Murder might be the first book written under Chris Cavender's name. But, the name is a pseudonym for author Tim Myers, who has written other successful cozy mysteries under his own name, as well as the names of Elizabeth Bright and Melissa Glazer. This book might be just a slice of Myers' mystery background, but his writing style is now well-seasoned. A Slice of Murder is a savory treat for cozy mystery lovers, and we'll be waiting for seconds. "More, please," Chris Cavender.

Shop Indie Bookstores
Posted by Lesa at 4:00 AM

A cozy mystery with food, set in the South sounds great to me!

I have one of those neverending lists, and a whole room for my TBR pile, Kaye!

I'm into those cozy mysteries with food, too, Bermudaonion. And, the Southern setting is just a plus.

I'll definitely have to read this one...a cozy set in NC. Thanks.

This review made me hungry. Oh dear...

You're welcome, Elizabeth. And, I'm sure Chris (Tim) will be happy if you do pick it up. And, it's food related!

I'm going to have to keep an eye out for this one it sounds great.

Thanks for the review!

You're welcome, Heidi! It should be available, as of today.

Just finished this delightful read and I am ready to pass it on to another mystery reader here in the office. It was light, fun and made me hungry for pizza. I am totally looking forward to the next in this series - so when is the next book coming out?

I'm afraid I don't know when the next book is due out, catsatthelake. But, I'm glad you enjoyed it, and are passing it on!