Point No Point by Mary Logue 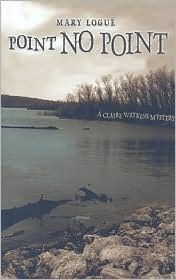 Point No Point, is a hot and steamy summer book. The setting, a sweltering Wisconsin community, just reeks of sex. It's a book charged with emotion, including Claire's.

Deputy Sheriff Claire Watkins is the chief investigator for Pepin County, the smallest county in Wisconsin. So, when three departments argue over a body found in Lake Pepin, the smallest force gets the case. Who is the man found floating near Point No Point? The only clue is his unusual tattoo. But, before Claire can get too far into the case, Claire's boyfriend, Rich, is called to his best friend's house. There, he finds Chet in bed, cradling his dead wife. Did Chet shoot her, or was it a suicide? With Rich defending his friend, and Claire doing her job, they soon find themselves on opposite sides.

Claire has her hands full. "Suddenly it felt like a hole opened up in the floor and she got sucked down into a vortex of panic: her life was falling apart. Rich had moved out, Chet's wife was horribly dead, her own arm was broken. She was going into menopause and probably had osteoporosis. If there was a bad way to look at something, it presented itself to her at that moment." These problems don't even mention her daughter, Meg, a sixteen-year-old pondering whether to have sex with her boyfriend.

It's a hot summer in Wisconsin. As the small department deals with a murder case, and another case they're not sure of, they start to feel the pressure. Claire isn't the only one to lose control in the heat. Everyone is under a great deal of stress. Sex can be as oppressive as a torrid Wisconsin summer in Mary Logue's Point No Point. And, sometimes, people live to regret their actions.

Logue is a master at the quiet mystery, the small police department dealing with humanity. And, the quietness, the small town nature of the book, make the crimes seem that much worse, and that much bigger. If you haven't read a Claire Watkins mystery, summer is the perfect time to start with Point No Point.

I've just finished a book and am looking for something else to read (a summery mystery). This sounds like it might fit the bill.

I love series that I can pick up part way through and still know what's going on. I'm going to have to get this book!

And, for the summer, it's a fast-paced book. I don't want a slow book in which nothing happens.

I hadn't read any of the other books in the series, but I didn't have a problem at all.

You should go back and read the rest of the series. I've read them all, and IMO, while I liked this book it's not as good as previous books in the series. I think it drags a little bit and the relationships overshadow the mystery.

I will have to go back and read earlier ones. The relationship is why I stressed the steaminess of this particular book, rather than the mystery aspect.

Thanks for the comment about the other books, Pat! I appreciate it.