Vicki Delany makes a departure from her contemporary 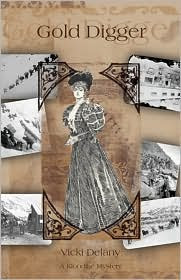 mystery series set in British Columbia to take us back in time to 1898 and the Klondike Gold Rush in Gold Digger. Delany proves to be a master at the historical mystery, just as she is for the traditional mystery. She even brings humor to the settlers' harsh lives.

Fiona MacGillivray is quite satisfied with her life in Dawson, Yukon Territory. She's the owner of the Savoy, a saloon and dance hall where the most popular dancer in town performs. She's the proud mother of a twelve-year-old son, Angus. And, she considers herself the most beautiful woman in Dawson. She is a little egotistical, as evidenced when she says, "I love a good parade, as long as I'm the center of it."

And, Fiona and her wonderful son are the center of this story. Angus is a curious young man who enjoys this life more than their previous life in the east. Where else could he run wild during the day, and spend time following Constable Richard Sterling, a member of the North-West Mounted Police? Angus has ambitions to be a Mountie.

While Angus whiles away his summer days, Fiona keeps a tight grip on the dance hall and its employees. And, everything goes fine until a reporter from San Francisco shows up in town. It doesn't take long for Jack Ireland to alienate most of the townspeople. It also doesn't take long for him to end up dead on the stage at the Savoy. Fiona is afraid the RCMP might shut down the saloon or find one of her employees is guilty. It's not that she's concerned about finding Ireland's killer, since no one liked him. She can't afford to lose business. There hadn't been a murder in Dawson in the entire year, and she's not happy the body was found in the Savoy.

Just as in her other series, Vicki Delany creates realistic, believable characters, beginning with Fiona and Angus. Fiona is a mysterious woman, creating herself anew in a new city, after a past that is only hinted at. And, as much as people like her, even her friends are not deceived. One man tells her, "Fiona, for such an intelligent woman, you can be amazingly dense when you're blinded by your own vanity and self-obsession." Despite her own self-obsession, Fiona is a loving mother, concerned that Angus grow up educated and unspoiled. And, Fiona is a figure of humor for what could be a depressing story because of the living conditions in Dawson. "Would I have to go to jail if I lied? I couldn't imagine myself in jail. The clothes must be simply hideous, and the food doesn't bear thinking about. Not to mention the constant company of other women."

Angus is a wonderful character, a curious, energetic twelve-year-old boy. He's fascinated by the RCMP, hates his summer job in a store, and enjoys running the streets. And, he's curious enough about the murder investigation to do some spying himself.

The rough life led by the settlers is beautifully described, in detail. Delany shows the harsh conditions, the rough lives of men and women. She doesn't hide the lives women lived as whores, just trying to get by. The streets are often filled with mud, and worse. Animals, and humans, are abused. It wasn't an easy life in the Klondike. At the same time, it's interesting to see how the RCMP enforced rules about closing on Sunday, and not swearing.

For those who appreciate historical mysteries, Gold Digger should be a treat, with its well-developed characters and setting. And, once you've read this one, try Ann Parker's series set in 1879 and 1880 in Leadville, Colorado, where there was a silver rush. Parker's Inez Stannert is also a saloon owner. It's interesting to compare the books, two outstanding historical mystery series with interesting settings and characters. Vicki Delany's Gold Digger is a welcome addition to the genre.

"The Hong Kong Connection" is a legal thriller about a gutsy female attorney who takes on high ranking International officials. It's a taut, rollercoaster of a ride from New York to Palm Beach to Washington D.C. to Hong Kong. The plot is expertly woven, the characters persuasive, and the dialogue snappy and spot on.
www.StrategicBookPublishing.com/TheHongKongConnection.html

M.L. Kiner - This time, I'm going to leave your comment on my blog, only to ask you to stop putting it on my blog. It's very self-serving to put The Hong Kong Connection on so many blogs about other mysteries. I'm sorry. I wouldn't read something that is pushed so constantly by someone who doesn't care to comment about the book I'm writing about. And, I doubt my readers will. I'll leave the comment this time, but, in the future, I'll delete it as I have in the past. So, you're wasting your time telling me about it.

what got me was referring to the book as a "rollercoaster ride"! If you want to tell us about a book, tell us about it (in a legit format), don't just praise it!!

That said, I wanted to comment on Vicki Delany's new book. I knew she'd stepped aside from her modern series, but hadn't heard much about the new book. I love historicals and don't know much about this period - or life in early Klondike - so I'm happy to learn about "Gold Digger." Thanks!

You're welcome, Clea! I'm afraid Vicki's new book is from a small press, and it might not get very much attention. It's a shame. It's a book with a terrific cast of characters, and, as you said, a period and location we don't know much about.