If you couldn't watch the snake scene in Raiders 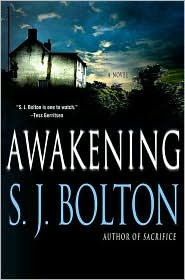 of the Lost Ark, S.J. Bolton's Awakening isn't for you. If you're in the mood for one of the best, imaginative suspense novels I've read this year, you'll want to check out the book. But, don't read it if you can't stand snakes. You've been warned.

Clara Benning is a wildlife veterinary surgeon working in Dorset, England. Animals are her refuge from the cruelty of humans, who often shudder when they see her deformed face. But, Clara's neighbors reach out to her in desperation when the village seems to be invaded by snakes. Once they knew she saved a baby from a bite from a venomous snake, they know she's an expert. Despite her unwillingness to talk to people, she's drawn into a neighborhood meeting to discuss the problem. At that meeting at the manor, she sees the local celebrity, owner of the manor, and meets Matt Hoare, a man who seems to have a great deal of influence in the community. Following the incident with the baby, and a night chasing snakes with Matt, Clara turns for advice to Sean North, the world's best known herpetologist. Neither Clara nor Sean think a local man was actually bitten by an adder. They think he was murdered, with an adder's venom.

While her village is invaded, Clara faces her own demons. She's loath to return home after her mother's death because she has never forgiven her for the incident that ruined her face. Clara is the daughter of an archdeacon, and an alcoholic mother who was drinking when her daughter was injured. She spends most of her life avoiding attention. "I have a chip on my shoulder the size of a boulder, as my sister frequently and accurately reminds me. I am painfully shy, permanently short-tempered and totally self-obsessed." She's definitely not willing to step into the role of heroine.

But, Clara isn't the only one haunted by the past. As she interviews village elders, she continues to stumble across stories of a local church, and the fire that burned it down in 1958. Fifty years ago, those same people spoke of snakes. Now that snakes have returned to the village, invading houses, some of those elders are dying. And, Clara, the loner with knowledge of snakes, suddenly seems to be a good suspect.

Bolton's debut novel, Sacrifice, was a powerful novel featuring another lonely woman. However, it dragged at times, and it was obvious it was a first effort. Awakening is a compelling story with a complicated character, and a plot that entwines snakes, religion, the past and the present. Bolton has found her voice with this novel. She portrays the darkness and secrets of the isolated British village as successfully as Val McDermid did in A Place of Execution. Now is the time to discover S.J. Bolton's Awakening.

I can't stand snakes, so I guess this one isn't for me!

That's why I warned readers, Bermudaonion. Terrific book, but those who don't like snakes, wouldn't want to read it.

I am just about to finish this book and I loved it! I also enjoyed "Sacrifice" very much, which led me to search for more titles by S.J. Bolton. She is definitely an author to watch!

She is good, isn't she, Caroline? I loved this one, too. Awakening just had it all together.

Lesa, this one sounds so good; i have o check out Sacrafice as well. Thanks 4 the great review.

You're welcome, Diane. Sacrifice is good, and you should check it out. But, Awakening is a mature book.

I liked this one, and emailed the author tell her. She's a lovely lady and when I mentioned in my review that I was going to get Sacrifice, because I hadn't read it yet, she mailed me an autographed copy from England. I'm looking forward to reading it!

Awakening was my favorite of the two, Kelly, but I'll be interested to see what you think!

this site depicts the significance of warnings before doing any thing.