Before I review Mind Scrambler, the latest John Ceepak 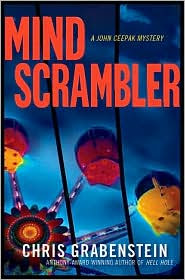 mystery by Chris Grabenstein, I have to let readers know that I was predisposed to like this book. I read Mind Scrambler in manuscript form, and I'm thanked in the Acknowledgements, as "I want to thank...Lesa Holstine and librarians everywhere." Now that I've said that, Chris asked me to read the manuscript because he knew I'd be honest about my opinion. So, here it is. If you're not reading Chris Grabenstein's mysteries, why aren't you? He's writing some of the best mysteries out there right now, both adult and juvenile. And, Grabenstein certainly creates interesting characters.

If you haven't yet read one of the Ceepak mysteries, they feature two cops from a resort town in New Jersey, Sea Haven. In the course of the series, we've watched Danny Boyle grow up, from a part-time summer cop to a twenty-five-year-old cop, a little more mature, but still learning. And, he's studying under John Ceepak, an MP during the Iraq War, a man who lives by the West Point honor code, "I will not lie, cheat or steal, nor tolerate those who do." It's not easy for a kid who grew up on the Sea Haven beaches to live up to that standard, but Danny's trying.

If the hotel can't shut down the story, it will be made for the tabloids, with "kinky sex, celebrities, backstage romance, murder, death." So, Danny and Ceepak are deputized by an Atlantic City detective to help with the investigation. Is Katie guilty of kinky sex? Why did she call Danny, saying she wanted to talk about her new boyfriend, Jake? Where is Jake? Why is Danny the only one seen on a camera in the hall, despite the fact that Rock uses that hallway for his illusions? What is the connection to Lady Jasmine, another illusionist? Ceepak reminds Danny that "Magic is the art of misdirection", and there seems to be a great deal of that in the course of the investigation.

Ceepak sees their confusing case as part of the misdirection, "The more we listen to this cavalcade of lies, which can only be countered by those who have been silenced or remain unavailable for questioning, the more we are trapped inside their illusion." But, Danny, the kid from Sea Haven, compares it to the Mind Scrambler, an amusement park ride. "It's like everybody we meet in Atlantic City is determined to keep us spinning around in circles underneath a dark dome."

No one involved in this case will emerge unscathed, a case with murder, sex, illusion, and disillusion. Grabenstein successfully scrambles the minds of his two main characters, along with the reader's mind. Ceepak and Danny will both be changed by their experiences. In the last book, Hell Hole, Grabenstein revealed more of Ceepak's past, the ugliness and brutality he witnessed in life. As each book peels back more of Ceepak's life, he becomes even more interesting. And, as Danny works with his mentor, he continues to grow. Grabenstein's characters have depth. Each book in this series builds on the previous one. Grabenstein himself is a Mind Scrambler, keeping his readers and his characters on their toes.

Mind Scrambler is only the fifth book in the Ceepak series. If you've missed the earlier books, now is the time to start the series and catch up. Chris Grabenstein is writing about two of the most interesting, complex characters in crime fiction right now. Mind Scrambler is the perfect summer mystery. So, I'll end this as I started. If you're not reading Chris Grabenstein's mysteries, why aren't you?

Hi, Lisa! Thanks for the thoughtful review. I'm going to take a stab at rewriting TO DIE FOREVER this summer, the other manuscript you read for me...and actually gave me a better title than the one I had.

Wish you could join us at the party on Tuesday in NYC. We hired a magician who, apparently, can read your mind and tell you what word on a book page you've selected...

Darn! I wish I could join you on Tuesday as well. What a perfect trick for readers!

You're welcome, Chris. I didn't want to just say, I love this book. Now read it! But, that's how I feel about Mind Scrambler. Perfect summer book.

I can't wait to get this book. I have it on order.

I *love* reading anything that Chris Grabenstein writes, and enjoy watching his videos too! My copy of Mind Scrambler is on order, hopefully I get it early next week and can go visit with Ceepak and Danny again.

It's worth waiting for! I've read it twice, and it's worth it.

You're right, Patty. I don't watch a lot of book trailers, but Chris' are terrific. This one is good, but I thought the trailer for Hell Hole was fantastic.

If you're already a fan, you'll love the new book.

This author is terrific. I need to add this to my list. Thanks

Please do add this to your list, Diane. Enjoy!

I have to second Lesa's sentiment. I love all the Ceepak novels, but MIND SCRAMBLER is definitely my favorite. Because I so love the relationship between Ceepak and Danny, this book takes that relationship to new heights. Since I read it around Christmas time, I have to say it's a great read ANY TIME of the year!

Thanks, Jen. I'm with you. The relationship between Ceepak and Danny is very special. It will be interesting to see what happens as the series progresses, and if Ceepak's father comes back.

I've heard nothing but good of the Ceepak series, and I've just gotten a copy of Tilt a Whirl. Can't wait to read it!

The Ceepak series gets better and better. The bad news is, word on DorothyL is that St. Martin's hasn't picked up any more in the series after Mind Scrambler. It would be a shame because this series is just now building a solid group of followers.