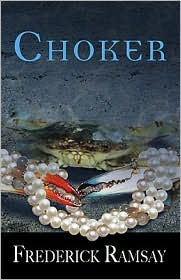 It's never been a secret that Sheriff Ike Schwartz has a CIA background. Lucky readers get to watch him in action in the latest mystery by Frederick Ramsay, Choker.

The book opens on the 4th of July with the scene of a WWII era freighter, Saifullah, silently moving in the fog. That short opening is followed by the crash of a small plane, and the death of two people on a boat. And, it's the crash that interrupts Ike Schwartz' vacation at Dewey Beach, Delaware. If Charlie Garland, an old friend from the CIA, hadn't asked Ike to look into the mysterious disappearance of his niece's fiancé, Ike might have gone stir crazy. But, the phone call Charlie received from the missing pilot leads both men to think something unusual happened that night.

While Ike resurrects his past, including some time as a pilot, back in Picketsville, Virginia, some teenagers are shaking up the local Episcopal church. Father Blake expels a boy from church after he attempts to take communion wearing a Satanic cross. Blake's actions bring a swift reaction from a power in the church, but he's determined to fight against the evil indicated by that cross. However, he's not finding much help at the high school, and even the acting sheriff is reluctant to investigate.

Once again, Ramsay surprises readers with his latest mystery. They are always complicated books, police procedurals with fascinating characters, beginning with Ike and Charlie. In fact, I'm beginning to be quite found of Charlie, a CIA PR man who is "spooky" even to those insiders at the CIA. Ike Schwartz continues to show strengths, a willingness to protect those he loves, including his country. Father Blake's role in this series grows larger, and minor characters, such as the Sutherlin family, beginning with the matriarch, have essential roles in the plots.

Choker combines the best of police procedurals with a threat to national security, unfortunately, a believable threat. If you haven't yet discovered Frederick Ramsay's crime novels, you're missing some very special books.

This story sounds really interesting. I shall definitely look this one up.

I love the Ike Schwartz mysteries. Would I steer you wrong? (grin)