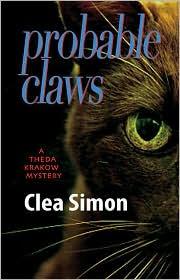 rock music scene, but she would always agree to help a friend, and the cats they both love. When cats at the Helmhold Home for Wayward Cats receive poisoned cat food, Vi asks Theda to investigate. Before she knows it, she's way over her head in the fourth book in Clea Simon's Theda Krakow series, Probable Claws.

It doesn't seem too difficult to try to track a bag of cat food. But, there could be a number of reasons for poison, everything from jealousy, accusations of witchcraft, to local politics. As Theda digs deeper, her editor at Boston's Morning Mail shows some interest in the story since it could link to the city shelter. But, suddenly Theda finds that she's alienated the vet who is a friend, her boyfriend, Bill, and, even Vi. Her questions appear to be accusations, and before she can redeem herself, she's found with a bloody scalpel and a body. Now, her own cat, Musetta, is her only witness, and she has to find a killer since the cops are convinced Theda herself is their culprit. Theda Krakow's persistence makes her an excellent amateur sleuth and journalist, but, in Probable Claws, it just might lead her to tragedy.

Once again, Clea Simon skillfully brings together the various aspects of Theda Krakow's complicated life. Not every author can intertwine cats, the rock music scene, and the problems at today's newspapers. Over the course of this series, though, Simon has managed to build sympathy for Theda, a woman who often alienates even the people who love her, as she gets so caught up in her current story or passion, whether it's cats or rock music, that she neglects her personal life. Readers who appreciate complicated characters, and intricate plots, will appreciate Simon's latest crime novel, Probable Claws.

Hi folks!
I'm enjoying Lesa's fabulous review and hope you are, too. I wanted to stop in to let you know that I'll be around all day. If anyone has any questions about me or my books, post them here and I'll respond in the comments section.

Thanks so much!
Clea Simon

And, Clea has been generous to provide autographed books for giveaways. So, stop back late tonight or tomorrow to find out how to enter the contest.

This is my favorite in the series. I love how Clea weaves the many different threads of Theda's life together into one fascinating whole. I'm particulary enjoying the evolution of her relationship with Bill.

I have to say, though, everytime something happens to Musetta in each book in the series, I start to feel sick to my stomach, and even though my intention at the start of reading this book was to read it slowly and savor it, once Musetta became a key part of the story in a worrisome way (I'm trying to say this without giving away the plot!), there was no way I could put it down. It didn't seem to matter that I sort of knew she was going to be fine (but there's always that nagging doubt with mystery authors.... :-)

I hope will be more books in this series in the future.

Thank you, ConsciousCat! For what it's worth, I can promise you without ANY reservations that no animal in any of my mysteries will ever come to serious harm! I had to stop reading "Child 44" (I think that's the title) because of the opening scene. Just couldn't go on - and I wouldn't want to write that either. So read on without fear!

Since you said you'd be answering questions here, I'm going to take advantage of your generous offer!

I'm curious about your process when you write the books in this particular series. Do you outline your plot from start to finish, or does it evolve as you write? Does Musetta influence the plot? Do you ever find yourself surprised by a plot twist you hadn't planned?

Thanks, Clea! (and apparently I was sloppy when I posted my earlier comment and didn't put my name in - I'm ConsciousCat).

Process... hmmm... I'm not really an outliner. I've tried that and it doesn't work for me. I feel like the energy I put in the outline took away from the book itself. That said, I don't totally fly blind. I tend to start with an idea of the plot: I know pretty much who did the crime and why, and I have a good idea of the characters will interact. Then I start writing. Recently, the last few books, I've put up a big white board with a timeline on it. On that, I put sticky notes (Post-Its) with ideas and bits of dialogues, things that I think I want in the book or bits of motivation. I like the stickies because I can move them around to different times on the timeline. I don't always use them, but it's nice if I'm blocked to look up and see something I can use, something I can write.

OK, does Musetta influence me? Definitely. She's constantly doing something that I want to put in the book. I just love watching her. (Right now she's lying on her back and purring like a little bellows.)

And plot twist? Yes, sometimes I'll be writing somethig that I thought I wanted to write and it just doesn't work. That's when the characters really want to do something different. It's incredibly fun - it just happens. And 99.9 percent of the time, it's for the best. I suspect that my subconscious has been thinking more about my plot and my ccharacters than I have (consciously), but however it works, it's fun.

Thanks, Clea! I really enjoyed this look "behind the scenes." As a new author, I'm eager to learn from established authors, so I really appreciate you taking the time to answer my questions.

This is one of my favorites in the series too. I especially like those moments we get to spend with Musetta. :-) I like how Clea always manages to throw in a good social issue relating to animals--without coming across as preachy in any way. And Theda's life--it's so interesting!

Thank you, Wendy. That's true. Clea does bring up so many social issues, but doesn't get preachy.

I'm a big fan of Musetta's, like you. And, I worried about her in this one, although I do know Clea would never let anything happen to one of the cats.