The Neighbor by Lisa Gardner 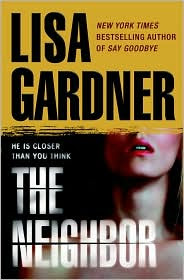 I'll admit I'm a wimp. I don't usually read suspense novels, particularly women and children in jeopardy books. Give me a good mystery with a detective or cop investigating a case. It usually puts the mystery at a distance, where I want it. But, Jim insisted I read Lisa Gardner's The Neighbor. And, he was right. I couldn't put it down.

None of the neighbors really knew Jason and Sandy Jones. She worked days as a teacher; he worked nights as a reporter. And, they doted on their four-year-old precocious daughter. So, why were their doors made of steel, and the windows blocked in the relatively safe Southie neighborhood of Boston? That only came to light, when Sandy disappeared from their house, leaving behind their daughter. And, Jason insisted she never would have left Ree.

But, there's something suspicious about Jason Jones' reaction to his wife's disappearance, and Sergeant Detective D.D. Warren is determined to discover if he killed her. He has almost no reaction to her disappearance, only caring about Ree, who might be the only witness. And, isn't it always the husband?

But, there's also no blood, and no proof Sandy was killed. And, Aiden Brewster, the neighbor down the road is a registered sex offender. What about the brilliant thirteen-year-old boy who is totally in love with his teacher? Everyone knows teachers get caught with their students nowadays. And, why did Sandy run off with Jason in the first place, a few years after her mother's death?

Who are the Joneses, those secretive people who lived behind steel doors? Jason Jones knows he'll be the primary suspect. The husband always is. Aiden Brewster knows he'll be suspected, and his life is over. The sex offender down the road is always the suspect. D.D. Warren isn't at all happy with her choices.

So where is Sandy Jones? The Neighbor will keep readers in suspense right until the final chapter. I'll admit, I was hooked. That doesn't mean I'll read more suspense now. It means Lisa Gardner's latest book is intriguing, with constant red herrings. Good luck in guessing the ending.

This one certainly sounds intriguing. I've never read Lisa Gardner but I just may give her a try. Thanks for the excellent review.

You're welcome, Kaye. I hadn't read her either, but Jim's read all of her suspense novels. This is the first one he recommended to me.

Thank you Lesa! I'm glad you enjoyed it. When I read it I knew it was your kind of book. For other readers, all of Lisa Gardner's books from the first one are great!

I love you Lesa,

Thank you, Jim. I already recommened The Neighbor here at work today.

I love you, too. Thanks for the recommendation!

I've read good things about Lisa Gardner's work and even have one of her books that someone sent me, but haven't tried it yet. Great review.

Thank you! I always appreciate your comments about the reviews.

O.k. Lesa, you're as good as suspense writer as Gardner, I think. I need to pick this one up because I want to find out what the heck happens! Such a tease!! :)

Bigger tease than you think, Jen. I didn't give you all the suspects, and didn't give you enough information. I suspected a little of the last chapter, but not everything.

I have read all of her books, so this one will be on my list at some point.

You're with my husband, Caite. He's read all of her recent books, not her earlier romances. But, her new books always end up on his list now.

I hav read her 'gone'..it ws vry gud..hopes dat I will catch this one too..anyway thx for review