The Lost Recipe for Happiness by Barbara O'Neal 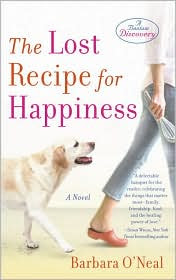 Barbara O'Neal's debut novel, The Lost Recipe for Happiness has one of the worst covers I've seen this year, for one of the best books I've read. The cover is so inappropriate, indicating it's fluffy chick lit. This book needs a warm, suitable cover such as that on Erica Bauermeister's The School of Essential Ingredients. The cover should draw people in to this serious romance for those of us who love sensuous literature. Instead, serious readers will think this is light material, and not pick it up. I'm afraid this book might not find its audience.

O'Neal gives readers the story of mature characters, lost in their past, and struggling to find a love that will allow them to move on. There are ghosts, sensual moments of taste and smell and touch, the richness of wonderful food, and tragedy. Sarah Addison Allen's review for the New York Times summarized it beautifully, "As dark and deep and sweet as chocolate."

Elena Alvarez has been searching for a home her entire life. There were short periods of home, and family, but her youthful home with cousins and her grandmother was destroyed by a tragic car accident when she was just seventeen. Elena suffered a broken back, broken ribs and hip. But her favorite cousin, her boyfriend, and two other cousins were killed. Since then, Elena sought homes in restaurants, studying in Paris, working in London, San Francisco and Vancouver. When her romance with the chef in Vancouver blew up in her face, she found herself fired, without a job. "This was not how she had imagined her life would turn out, that she would be nearly forty and still husbandless, childless, rootless."

But, the owner of that restaurant, film producer Julian Liswood, offered her the chance of a lifetime, and the chance to change her life. Liswood offered her the job as executive chef in his new restaurant in Aspen, with the opportunity to hire her own staff and set her own menu. She was given one year to get the restaurant off the ground. Elena poured herself into the job, and, despite the rivalries in the kitchen, the aches of her body, and her troubled dreams, she thought she found a refuge.

Elena has ghosts in her life, the people she loved who died in the accident. She can live with the ghosts because she finally has her opportunity. But, Julian Liswood has ghosts of his own, including his mother's murder. After four divorces, two to the same woman, he is a lonely man, who wants to be a good father to his fourteen-year-old daughter. So, he moved her to Aspen. In Elena, he found a chef for his restaurant, but he also found another soul haunted by tragedy. He also found a woman afraid to love.

Through most of the book, Elena's true passion is food, and O'Neal brings the kitchen and restaurant to life in the flavors and scents, the richness of this book. It's a sensual book, filled with color and emotion. It's a book to be savored.

There's a dog on the cover of The Lost Recipe for Happiness, and there is a wonderful dog named Alvin in the book. But, this book isn't about Alvin. The cover is all wrong. This book is about passion. This is a book for fans of Sarah Addison Allen and Barbara Samuel. This book is food, and color, and passion, and ghosts of the past. Don't look for chick lit when you read The Lost Recipe for Happiness. Look for characters who suffered tragedy, and survived.

What a great review!

Just curious. In your opinion how much do covers really matter? Can a cover truly make or break a book?

I've bestowed an award to you! You can pick it up here:
http://mindingspot.blogspot.com/2009/06/humane-award.html

Thank you, Bermudaonion! I always try to be honest with the reviews, and this book was terrific.

I do think covers really matter. I know when I was doing book selection regularly, the collection development officer and I bot admitted there were some novels we just couldn't push to anyone because of the covers.

And, I think it matters for this book. This is not chick lit, but the cover markets it that way. This book would have found its correct audience with a different cover, once emphasizing the food rather than the dog.

Thank you so much for the award! I'll be checking over there a little later. I really appreciate it!

I already have this book on my wish list, but I was judging it by the cover and thought it would be fluffier. Glad to hear that you liked it!

It isn't fluffy at all. It's a deceptive cover.

It was a wonderful book, Charles. But, would have you picked it up with the cover it has?

Sounds like you'd like the Australian cover better, Lesa - I couldn't resist buying the book based on this gorgeous cover. (Mmm, chocolate!)

Now, that's a cover that reaches out and grabs me. Thanks for sending it to me. They should have done that one here, and it probably would have had better sales.