The Last Olympian by Rick Riordan 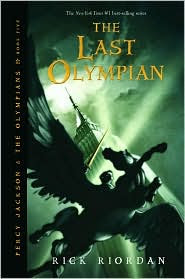 With some juvenile fantasy series, I'm as eager to read the next book as younger readers. There were large numbers of us that felt that way about the Harry Potter books. I couldn't put Emily Rodda's Deltora Quest books down. Bloodhound (The Legend of Beka Cooper, Book 2) by Tamora Pierce is next in my TBR pile, and I've read almost all of her books. And, then there's Rick Riordan's Percy Jackson & The Olympians series. I just finished The Last Olympian, the fifth and last book in "the first Camp Half-Blood series". It was worth waiting for, and I was happy to see that comment about the first series. I'm already for the second series.

If you haven't caught up with the series yet, Percy Jackson is a demigod. His mother is human, but his father is Poseidon. And, Camp Half-Blood is a camp where other demigods can spend summers, learning to support their parents, and fight against monsters, led by the Titans. By book five, The Last Olympian, Percy and his friends, including Annabeth, another demigod, and Rachel, a human who can see through the Mist that usually hides gods from humans, are getting ready for a "final" battle. However, the young people and their parents are in trouble. The gods are trying to fight Titans who are marching across the United States, destroying buildings and landmarks. Poseidon is tied up trying to protect his underwater kingdom, while some gods are refusing to participate in the war. It's up to Percy and his friends to defend New York City, the modern day site of Olympus. How can a group of young people oppose the oncoming army of monsters?

Percy sums up their problems. "I tried to imagine how things could get much worse. The gods were in the Midwest fighting a huge monster that had almost defeated them once before. Poseidon was under siege and losing a war against the sea Titan Oceanus. Kronos was still out there somewhere. Olympus was virtually undefended. The demigods of Camp Half-Blood were on our own with a spy in our midst. Oh, and according to the ancient prophecy, I was going to die when I turned sixteen."

Throughout the entire series, Riordan has masterfully created characters and a world in which gods and humans co-exist in modern times. The stories of the Greek gods are vividly brought to life. And, the human characters have flaws, just like their parents. But all of them are striking characters from Annabeth to Rachel to Luke, the renegade, to Percy's mother and stepfather. And, then there's Percy. When we first met him, he was a troubled middle-schooler, with ADHD, dyslexia, and a father he never knew. He's just the type of boy to attract readers. From the first book to this one, readers have watched him grow into a hero, and a teen attracted to girls. Riordan couldn't have done a better job with the characters, the action, and the series. With the additional humorous touches, and Percy's own wry look at life, these books are perfect.

Now, please, Rick Riordan. Bring on the second series of books in the Camp Half-Blood series. The Last Olympian ended this one perfectly. We're ready for the next prophecy.

My 10-year-old son LOOOOOOVES this series. He's gobbled these books up (he's reading this one right now). :D

I'm with your son, Rhonda, and so is my nephew. We both LOOOOOVE this series.

Isn't it great to watch your son read?

We also meet the real last Olympian (who turns out to be completely unexpected, because this person has never been directly mentioned before, and several items and creatures from Greek Myths make their appearance, like Pandora's box. thank you for shearing your post.

You're welcome, and thanks for the added comments. Terrific book!