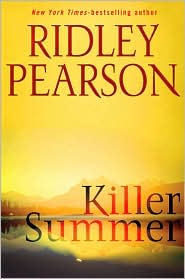 to familiar territory. Over the course of Ridley Pearson's Killer series, it's proven to be violent territory, but Sheriff Walt Fleming has learned to handle it in a county that is as large as Rhode Island. He's learned to handle the problems that wealthy newcomers bring with them. But, he'll have his biggest personal threat on his hands in Killer Summer.

It's time for Sun Valley's annual wine auction, an event that brings the world's most elite wine connoisseurs to town. This year, despite the economic downturn, people are interested in a special auction of three bottles of wine supposedly given to John Adams by Thomas Jefferson. And, it appears that a small group of criminals might be interested in them as well. A strange incident with a wrecker, a murder, and an explosion seem to indicate someone wants that wine.

Walt suspected someone would try to take the wine. He expected distractions and cover-ups. He also suspected there was more involved than the wine, no matter what its estimated cost. He just didn't realize his nephew, Kevin, would manage to get himself caught up in trouble, all because of a girl named Summer.

How can anyone resist Sheriff Walt Fleming? He's suffering through a divorce, hating the thought of losing his two daughters. He's not very astute when it comes to personal relationships, never seeing his cheating wife, nor noticing when a woman is interested in him. He can't communicate with his father, and works to try to be a father figure for Kevin. He's found of softball, gliding, and his dog. No, he doesn't do a very good job with personal relationships. He knows that his wife's "abrupt departure from the marriage had driven him deeply into his work...he realized he'd used his work as a place to hide." But, he's the right person to turn to in a crisis. "Emergencies instilled a certain calmness in Walt. His hearing heightened. He saw things clearly. He loved this shit."

And, it's hard not to love Ridley Pearson's latest story. Killer Summer is a gut-wrenching thriller, as the reader worries about the safety of people we've learned to care for. So, forget about housework or chores. Once you get caught up by the people and events in Killer Summer, you'll want a day just to yourself, a day to spend chasing criminals across rugged terrain with Sheriff Walt Fleming.

It is a real page turner! I couldn't put it down.

Oh boy! I'm happy to read such a positive review. I already have my copy..now I just need to read it!

Kris, I thought this one was the best in the series so far. Hope you enjoy it!

Just waiting or my hold to come in!