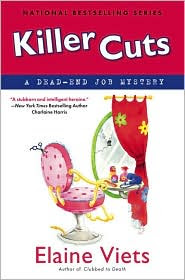 What's more romantic in June than a wedding? Elaine Viets, with her typical humor and skill in writing mysteries, manages to make weddings sound horrible in her latest Dead-End Job mystery, Killer Cuts.

Helen Hawthorne's latest low-paying job is at Miguel Angel's hair salon on Las Olas in Fort Lauderdale. She works as a gofer, running errands, sweeping floors, and bringing the customers ice water when they wait their turn for three hundred dollar hair treatments. But Miguel's work is worth it. He's even been asked to take care of makeup and hair for the bride of King Oden, a powerful gossip blogger and TV show host. Although Honey, the bride, is pregnant, she's determined to look her best as she marries the man who will take her from a nurse to a wealthy wife, with no pre-nuptial agreement. It's just too bad she has to put up with all of King's guests at the wedding. As Miguel's gofer, Helen knows the guests include King's ex-girlfriend who was a stripper, his ex-wife, and a number of sex-industry workers. So, in Helen's mind, when King ends up dead in the pool soon after the wedding, there should be a number of suspects. It's just too bad her boss snuck away from the grounds, dressed as a woman in a blue dress and blond wig. Other guests were frantically escaping from the crime scene and a fire on the grounds. But, Miguel was seen having a fight with King, and he was terrified of losing his business, and facing arrest because he was Cuban.

Now, Helen is worried about two problem weddings. She's determined to prove that Miguel is innocent so his business will get back on track. At the same time, she's facing her own wedding in her landlady's backyard. And, after the disastrous wedding she just attended, and the troubled marriage she had before, she can't help but worry about her own forthcoming wedding.

I'll be the first to admit I haven't read all eight books in Elaine Viets' Dead-End Job mystery series. While I admired Helen Hawthorne's work ethic, and willingness to work low-paying dead-end jobs, I tired of her fear of her ex-husband. But, of those books I've read in the series, Killer Cuts is my favorite. It's a reunion with favorite characters, such as Helen, her private eye fiancé, Phil, and, of course, her landlady, Margery. This time, I loved her boss, Miguel Angel. He's a wonderful addition to the series, and I hope he shows up again.

The biggest problem I have with long-running series is the unresolved nature of some of the situations. Diane Mott Davidson took too long before killing off Goldy's ex-husband. Joanne Fluke needs to bring some resolution to Hannah Swensen's love life. And, Elaine Viets needs to finish off the storyline with Helen's ex-husband, one way or another. Cozy mysteries are often read because fans like the familiar characters, and want to see what's happening in their lives. But, sometimes storylines drag on too long. Elaine Viets' Dead-End Job mysteries are too good to become dead ends themselves. And, she's at the top of her form with Killer Cuts. Here's hoping she can cut a deadbeat ex-husband from the series.

That book sounds like so much fun - I think the cover's fabulous too!

Nice review! I just picked it up at the library. I agree with you about her ex...that does need resolution. And I agree about Hannah! There's got to be some other single gal in small Lake Eden that would be worthy of Norman or Mike if she'd just pick one!

It is a fun book. And, I love a cover that reaches out and grabs you. Yes, the cover DOES sell the book, sometimes.

And, I always try not to give much away, so I shouldn't have spoiled anything for you. Enjoy it!

Pick Norman! Pick Norman! I'm glad someone agrees with me about those storylines that just drag on too long.