In the Shadow of Gotham by Stefanie Pintoff 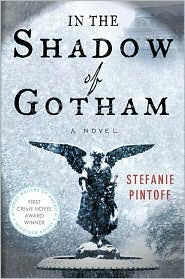 I recently reviewed Stefanie Pintoff's In the Shadow of Gotham for Mystery News. The review is reprinted here, with permission.

In the Shadow of Gotham was the winner of the first Minotaur Books/Mystery Writers of America Best First Crime Novel competition, and deservedly so. Pintoff portrays New York City in 1905 vividly, in all of the gritty details of everyday life.

After his fiancée died in the General Slocum ferry disaster, Detective Simon Ziele left the New York City police force, hoping for a quiet career in law enforcement in the small Hudson River town of Dolson. But, when Sarah Wingate, the niece of a wealthy local family, is found brutally murdered in her own bedroom, Ziele is thrust into the toughest investigation of his career.

To Ziele’s surprise, the day after the murder, he’s contacted by Alistair Sinclair, a professor at Columbia University. Sinclair, who specializes in criminal law, claims to have a suspect in the murder. One of Sinclair’s research subjects, Michael Fromley, has had conversations that indicated an uncanny resemblance to the murder. Since Sinclair is researching how past behavior and thoughts can indicate future crimes, he’s positive Fromley is the killer.

Despite Ziele’s suspicion that Sinclair is hiding something, he’s interested enough in the criminologist’s new field of study to follow the professor’s suggestions. Ziele is an unusual policeman for his times, interested in new scientific methods. At the same time, his job is to find a murderer, not be led astray by educational theories.

Before Ziele can find a killer, he’s caught up, not only in scientific exploration, but back in the crime world of New York City, where the worst criminals can do a favor, and appearances can be deceiving.

Pintoff’s debut mystery is a complex story, combining history, a memorable police detective, a new criminology science, and action. It’s an outstanding historical mystery in which the story doesn’t bog down in details. Pintoff’s debut is a success.


I was impressed enough with this book to ask Stefanie if she'd allow me to interivew her. The interview was May 15, here.

This sounds like a quality mystery novel well worth reading. Thanks for bringing it to our attention.

You're welcome, Jacqueline. Anyone who likes historical mysteries will at least want to give it a try.

sounds like an interesting book and what a great review.

Bermudaonion. Mystery News is always fun to read. I received my June/July issue last night and spent the evening reading it.

Thank you, Serena. It is an interesting book.

This sounds fascinating, Lesa and like something I would really enjoy. Thank you for posting this review here where I could find it.

You're welcome, Marleen. I'm getting ready to post the month of reading on ARM, but it's certainly not in the detail of my blog reviews.

That would be madness, Lesa. And besides, if we want to know anything more after seeing that list of monthly reads, we can always refer back to that blog for further details.
For me, your list and your blog are a great help when it comes to me making my list of recommendations of what books to order for our library system. And I can't thank you enough for that.

Thank you, SO much, Marleen. It's so nice to know you're using my list to make some recommendations for a library system in Ireland!

this book is definitely going on my TBR list to be read.

Thanks, Scrap Girl. I'm glad the review enticed you.

Well, not quite the library system in Ireland, but the libraries in County Cavan do benefit from your reviews and previews of books.
Not everything I put on my list actually gets ordered, but my track record is not bad either.

I'm sure it isn't, Marleen. Some of your suggestions have to be good ones, knowing what you read!

My biggest problem is that I would like to order almost everything, which of course is impossible. But there's no harm in suggesting loads of books and leaving it up to those in charge to decide what to leave out. And if they ignore something I think we really should have I just wait either a few months or for the release of the paperback and order it again.

Very good, Marleen! And, I'm sure your choices will end up being popular in the library.

LOL, I hope so, otherwise I may not be suggesting books for much longer.