Heather Lauer for Authors @ The Teague 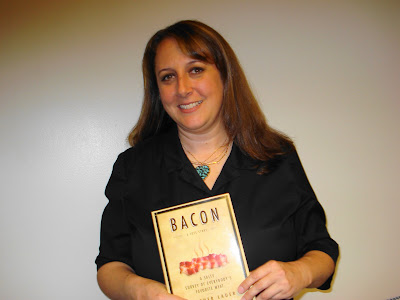 Phoenix author Heather Lauer kicked off her book tour for Bacon: A Love Story at an appearance at the Velma Teague Library for the Authors @ The Teague series.

Lauer was celebrating the fourth anniversary of her blog, Bacon Unwrapped. The blog started when Heather and her brothers were out one night, talking about how much they loved bacon. She said she should blog about it, and she started the blog. Lauer is a PR consultant by trade, so she's used to diving into a topic.

The author told an appreciative audience there are all kinds of bacon. She learned there's an entire subculture of people, including about twenty other bacon bloggers, who are passionate about bacon. People are obsessed with it, and it has a devoted following. Lauer learned all the crazy ways to cook with bacon, including garnish for cocktails, and in desserts. There's a culture of bacon products, everything from bacon jellybeans to band aids, and floss. They've all been inspired by the meat. She finds it an incredible topic. 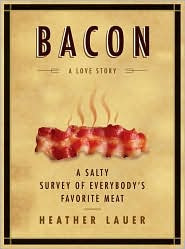 Bacon: A Love Story isn't just about Lauer for two hundred pages. It includes the history of bacon. Bacon has been around for thousands of years. It was necessary to preserve meat, so pork bellies were preserved. Bacon evolved over time. It was first used as a means of preserving meat. Up to 100 years ago, families raised hogs and made their own bacon. Lauer, whose family is from Idaho, has a family picture from the early 1900s showing her family after they've just finished slaughtering hogs.

On Lauer's cross-country drive, she found lots of people who make bacon because their family did. They may have found a recipe that was popular locally, and they continued to make it. Country curers in places such as Kentucky, Iowa and Missouri, evolved from people who fed families to an industry that is still thriving today.

There's a wide variety of bacon. There are niche producers, who find a speciality. Heather said her current favorite is a jalapeno bacon that can be found at A.J.'s, and The Pork Shop in Queen Creek. Grocery stores sometimes have their own version of bacon.

Bacon: A Love Story shows the evolution into various ways to use bacon. Bacon is used for breakfast, in wraps, and to enhance flavors. Bacon grease is used in cooking. Bacon is used in salads, desserts, and cocktails. There are bacon alternatives, such as turkey bacon, but that's technically not bacon, since bacon is cured pork belly. Bacon has inspired other products and ways to enjoy it.

According to Lauer, bacon has inpsired an entire culture. She's seen bacon wallets, bacon band aids. It was a fun book to write. The most rewarding part was the people she met. She did say, though, that every time she sat down to write, she got hungry. She talks about bacon everyday.

The audience asked Heather about bacon in desserts. She said it's usually used for the flavor of salty and smokiness combined, and mentioned she had it in a chocolate souffle.

She did interview a number of unknown chefs for the book because any chef can master bacon. Chefs are using it in unusual and different ways. One chef in D.C. did monthly bacon dinners, 6 to 7 course meals once a month. He also had bacon happy hours. Lauer's from Idaho, and she said in her hometown, you can get caramelized bacon in a BLT. There was a street vendor in Boise, Eric Savage, who sold chick-bacon-on-a-tater, late at night. It was wrapped in a tortilla with potato.

She also heard great stories from people. One man told of camping, and hiking in ten miles with bacon wrapped steaks. But, his tent had a bear outside it all night, attracted by the scent of the bacon. Heather said bacon lovers were gracious and fun to talk to.

When asked about bacon cocktails, Lauer said she's seen Bloody Marys the most. People usually use bacon as a garnish, or infuse the vodka with bacon. She's tried infusing whiskey with it as well.

Lauer commented that restaurants shouldn't mess with bacon. She said precooked bacon does not have the same flavor, and some restaurants are cutting corners by using it. One audience member responded there should be a special place in hell for those people who mess with bacon.

She said she did a survey for a book, "How do you like your bacon?" and discovered that people have really strong feelings about it. It's also cultural. British bacon is not the same; it's more like ham. She said their bacon is made from the back of the pig, and ours is made from the belly. They call ours streaky bacon. In Italy, it's panchetta. Beijing and Korea have bacon similar to ours.

There were even great bacon stories from the audience. One man said he was a baby, just eating baby food, and his grandfather fed him bacon. His first word was not Mama or Dada, but bacon.

Praline bacon can be found in New Orleans, caramelized with pralines.

Heather was asked about bacon memorabilia, and she said, after four years of doing the blog, every family member and friend gives her bacon-related gifts. Even her business card holder had a bacon motif. Some of the newer products using bacon include Baconnaise (bacon flavored mayonnaise), and bacon lip balm.

When asked if all the work with bacon improved her cooking skills, Lauer said, not really. She was in 4-H growing up, and she always cooked. The blog, and then the book, improved her writing skills, but not necessarily her cooking. Bacon recipes tend to be straightforward, and they can be thrown together.

Heather is kicking off her own Blue Ribbon Bacon Tour. It's a spinoff of an all day event held in Des Moines, Iowa every year. But, the actual tour will start on Sunday as a half-day event, from 1-5 at Renee's Grand Tavern. The Blue Ribbon Bacon Tour, presented by Vande Rose Farms, will feature a bacon eating contest, and, of course, bacon appetizers. In fact, Bacon, a Scottsdale restaurant, supplied sample appetizers for the audience at the Velma Teague book appearance. 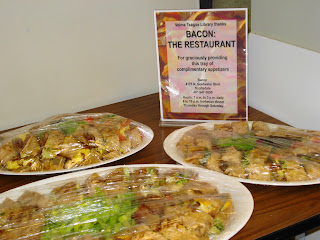 After the Arizona kick-off, Bacon Tour events are planned for Boise, D.C., New York and Pittsburgh. Lauer will be doing the event with Mr. Bacon Pants in Pittsburgh. Other events will be held in Milwaukee and Seattle. The inventors of Bacon Salt are from Seattle. The salt is kosher and vegetarian.

And, Heather Lauer's Valley favorites for bacon, since she lives in Phoenix? Matt's Big Breakfast in downtown Phoenix, and Queen Creek's The Pork Shop.

Everyone left contented after a discussion of Bacon: A Love Story, and a sampling of bacon appetizers from Bacon.