There are Ranger Babes and Morelli Cupcakes. I'm a Ranger 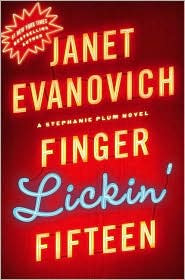 Babe, which is one reason I enjoyed Janet Evanovich's latest Stephanie Plum novel, Finger Lickin' Fifteen. And, I thought it was the funniest book of the series since one of the early ones when Grandma Mazur blew up a funeral home.

When Lulu witnesses a murder, she becomes a larger than life target. Although the two killers easily decapitated a celebrity chef, they can't catch Lulu. They can make her life, and, therefore, Stephanie's, miserable with shootings and firebombs, but that's no worse than Stephanie's usual life as a bail bond enforcement agent. It's Lulu's attempt at barbeque, coupled with her partnership with Grandma Mazur, that could drive Stephanie crazy.

Since Stephanie and Morelli are in their off again stage of their relationship, it's easy for her to agree to take a job for Ranger for a while. He asks her to go undercover to help him find the person who is using his business to break into houses and businesses. And, of course, it's Ranger. She just might want to go undercover for another reason, particularly with Morelli temporarily out of the picture.

Once again, cars are exploding, and criminals running from Stephanie. But, put Lulu and Grandma together with propane and matches, and Finger Lickin' Fifteen is explosively funny.

My wife and I ordered this one after several off. She had become too repetitive. Your review gives me hope.

You're fast! I bought this the other day but haven't had a chance to read it yet.

You're right, Joe. She had become too repetitive and boring. This one was funny, though. I hope I didn't steer you wrong!

I read it last night. Evanovich is a fast read, when you find the book funny. I enjoyed this one more than the last few.

Had almost given up on Stephanie as she seemed to be spinning her wheels, but am always up for funny! Will give her another chance as you liked this one better than the last few. Thanks!

I had to laugh remembering Grandma and the funeral home, that was a good one. After your review I look forward to reading this one.

I love quirky characters, which is why I write about them. Grandma Mazur is one of my all-time favorites! I think I'll buy this book. :)

I am glad to hear this one is funny and entertaining. I still need to read number 14, but I imagine I'll get to this one as soon enough. I'm another big fan of Grandma Mazur. :-)

I'm up for funny, too, everyone. I had a discussion at work today with a staff member. She and I both had laugh aloud moments during the book. I had two. Interestingly enough, she had a differerent one. So, hopefully, you'll all find something to laugh at in this book.

Hi Lesa,
I'm just about 2/3 through it and I'm enjoying it every turn of the page.
I, too, am a Ranger babe (I married Morelli, so a girl's gotta have fantasies) and glad to see that he and Lula play such big roles in this book.
The skips that Stephanie takes on are a riot too!
I'm in the camp of I-never-get-tired-of-this-series and they are my guilty pleasure which I look forward to every summer!
Have you read the Spellman books by Lisa Lutz? Love those too!

I can't wait to read this one. I'm a Ranger Babe myself.

Glad you spokeup to say you're enjoying it as much as I did. It's good so I'm not out on a limb saying this myself. Thanks.

Haven't read the Spellman books. To be honest, I started the first one, and I couldn't get into it.

If you're a Ranger Babe, Melanie, you'll enjoy this one!

Great review, Lesa. I thought the book was OK. It's hard to say why. There was something missing and I can't put my finger on it. The closest I can come to explaining it is that it was kind of like a really good karaoke version of a popular song. It wasn't bad karaoke, but it was still karaoke. I don't know if that makes sense, though. I have to admit, even though I wasn't wrapped up in the story (honestly, I was a little bored), I laughed myself into a coughing fit when I got to the part with the dancing hot dog!

I also wanted to smack Stephanie upside the head more than once. I LOOOOVE Ranger. And he obviously loves Stephanie. How can she be so stupid not to see it? GAAH!!

There's a Plum poll going around Amazon and a few other book sites I thought you might like to see. It's long, and you have to register to vote, but the results are interesting. I always thought the Ranger fans versus Morelli fans were pretty evenly split, but now I'm not sure. Seems like there's a clear fan favorite.

Oh, this I have to see. Thanks for sending the poll. Just from the sampling here on my blog, I would guess there are more Ranger fans. Everyone who commented here loves Ranger.

As to your feeling about this book, it might be because we've all read so many of the books that it's hard for them to be truly original.

Thanks for the poll!

Like I said, I can't put my finger on it. I thought maybe I was just over it, but I picked up Eleven on Top and laughed all over again. (And I've read that book so many times the spine has grown thin.) I don't think the originality bothered me as much as the lack of progression. I don't expect Stephanie to morph into a kick-butt bounty hunter who carries a gun and does her own laundry, but this is the third book in a row where she ruminates over the fact that her life is going nowhere... and does nothing about it. If JE knows the character is going nowhere, why not put her in a situation that gets things moving again?

Ranger has some excellent points...but I am a Morelli cupcake I guess.

I too used to love her books but have skipped the last few. Your review makes me think maybe it is time to see what Stephanie and Lulu and Grandma are up too.

Maybe if you skipped a few of the books, Caite, you'll enjoy this one. It's not as if there have been any changes in Stephanie's life that you missed by not reading all of the books.

I too was bored with this book. It had some funny parts but there was definately something missing. I didn't feel the sexual tension and conflicts between the characters.I thought for sure after reading Plum Spooky that Steph and Ranger were gonna hook up again. I think we've waited long enough. It was not the usual great work of JE.Most of her books cause me to laugh till I cry, but 15 just a few giggle.

I guess I was happy there were some scenes that had me laughing out loud. Sometimes these long-running series need something to pep them up.

Hello everyone! I just finish reading Finger Lickin' Fifteenm and I think it worths the time I spent on it, besides so, I laughed as I almost never do because this book mentions very funny issues.