Once in a while, I'm reading along in a book, and I stop, 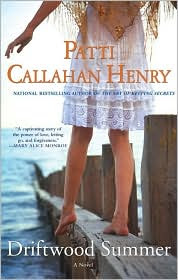 call my mother, and say, "I have a book you have to read." This week, it was Patti Callahan Henry's Driftwood Summer, although I warned her I had only read twenty-seven pages before I called. Fortunately, Henry's book didn't let me down. It's a perfect book for summer reading, or for book groups. It had complicated relationships, a bookstore, a beach setting, and sighs at the end. What more do you want?

How about an opening that captures a reader's imagination? "Bookstore owner Riley Sheffield believed that even the most ordinary life was like a good novel, a tale to be told. Her own life was full of twists and turns, secrets and surprises, with narrative threads that intertwined with the fabric of other people's lives. Her story revolved around a two-hundred-year-old cottage on the beach - Driftwood Cottage Bookstore."

Henry takes readers to Palmetto Beach, Georgia, a seaside, summer resort town. We're all invited to Driftwood Cottage Bookstore for the 200th anniversary of the cottage itself, twelve years as a bookstore. It's also the 70th birthday of Kitsy Sheffield, co-owner of the store with her daughter, Riley. Riley, is thirty, the oldest of three sisters, and the single mother of a twelve-year-old son, Braydon. She and her mother have planned a week long celebration, hoping to make enough money to save the bookstore, and keep it from closing.

So, Riley's sisters are called home, although neither want to return. Maisy and her sister had a fight thirteen years ago, when both loved Mack Logan. That fight led to actions that each kept secret, but whose repercussions still echo in the family. Maisy fled to California, and hasn't returned. Now, she's a successful interior designer, but her mother and older sister still make her feel young, wild, and irresponsible. Adalee Sheffield comes back from Auburn, angry that she can't spend the summer with her boyfriend, Chad. Both sisters are angry they had to return to save Riley's bookstore.

At Kitsy Sheffield's invitation, her daughters return home, and the entire community is welcomed. That includes Mack Logan, whose appearance could stir up old emotions. Driftwood Summer brings together a group of people, only now discovering the consequences of their youthful actions. As Maisy thinks, "Legend says that Driftwood Cottage is a place where people connect and all stories have happy endings. But maybe Driftwood Cottage is a place where all of our stories are played out over and over, again and again, none of them ever really ending, just continuing...."

Hi Lesa: In reading your review the one thing that immediately comes to mind is the fact that they are celebrating a 70th birthday and her "oldest" daughter is 30 - which means she had her at 40 and I don't know how many years between the other sisters but in my opinion it is a stretch and doesn't hold true. Do these kinds of things annoy you or am I a little picky? I guess that's why I don't like science fiction. I always like to be able to relate to the books that I read.
Regards,
Donna

I'm afraid you're a little picky,Donna. (grin) The good thing is, you wouldn't have read far in the book because it says right at the beginning it's her 70th birthday. Nope, doesn't bother me a bit. Give me good characters & I'm willing to forgive a lot. But, then I read fantasy, and will try some science fiction once in a while. And, there's nothing more unbelievable really than the cozy mysteries I read when the same character continues to get involved in murders, and the cops ask for her help. Talk about unbelievable!

So, this one just isn't for you. (smile)

a bookstore...a beach...the word 'driftwood'...is enough for me. Already I love the 'feel' of the book.

A book set in the South about a bookstore? It's calling my name.

I think you will enjoy the "feel" of the book. Try it!

It called to me the minute I saw bookstore. I hope you like it!

Hi Lesa: I guess it is funny that the 80 year old sleuth solving the murder doesn't bother me at all! I figure, hopefully, our little gray cells (isn't that what Poirot said) are always going to keep working.
All the best,
Donna

Oh, that's good, Donna! I guess we each of something that will knock us out of the story. (smile)

Hello. My name is Monae and I bought the book "Driftwood Summer" and I have NOT read it yet. I wanted to learn some more about the book and your review was very helpful. I am a huge huge huge huge huge huge huge book reader. I can't wait to read it. Here is a link to my blog ----> http://deardiary-monae.blogspot.com/ . Feel free to drop in anytime. Thank you.

Thank you for stopping by, Monae. I'm glad the review was helpful, and I hope you enjoy the book. Thanks!