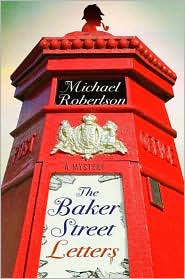 The Baker Street Letters is Michael Robertson's debut novel. It's a fun caper, a mystery that spans two continents. And, most of all, it's the story of the Heath brothers.

Reggie Heath is a responsible lawyer in London, well-off, and dating Laura Rankin, a gorgeous actress. He does feel slightly guilty because he stole Laura from his younger brother, Nigel. Ah, Nigel. He's currently suspended from practicing law, about to appear in front of a hearing board. He himself says, "I've been a poster child for attention deficit disorder since the day I was born." And, he's not enjoying the lowly job Reggie gave him while waiting for his hearing. At least, he isn't enjoying it until he stumbles across the Baker Street letters.

Since Reggie's office takes up the entire Two Hundred block off Baker Street, his lease requires him to answer all letters addressed to Sherlock Holmes at 221b Baker Street. When Nigel finds a twenty-year-old letter, written in crayon, by a little girl, asking for help finding her missing daddy, it's just a sad letter. But, he's intrigued by the recent letters asking for the return of "Daddy's maps," the items enclosed with the original letter. Nigel can't convince Reggie that it's important to go to Los Angeles and find the letter writer.

All of Nigel's persuasive arguments don't work, but the discovery of the body of Reggie's office manager in Nigel's office, and a note from Nigel, is enough to persuade Reggie that he needs to follow his brother to LA. This trip might have been Nigel's idea, but it becomes Reggie's nightmare. As he trails just hours behind his brother, in the search for a girl who wrote to 221b Baker Street, the murders start to pile up. When police on two continents are looking for Nigel, Reggie knows he must find his brother first. But, why is someone else interested enough to stay one step ahead in the investigation?

Robertson's debut, The Baker Street Letters, is a fast-paced chase through the backstreets of LA, as the two brothers look for a young woman. It's a successful caper, with an ending reminiscent of Jeffrey Archer's Not a Penny More, Not a Penny Less. Can it get any worse for poor Reggie Heath? The book has been optioned by Warner Brothers for television. If it makes it to TV, it will be interesting to see how they handle the brothers' relationship, and The Baker Street Letters.

Shop Indie Bookstores
Posted by Lesa at 4:00 AM

The basic premise of this just sounds so fun and fresh - thanks for letting us know about it!

You're welcome, Clea! Thanks for taking a break from your own writing to stop by.

This books was whimsical at times, but ultimately a major let-down. The last couple or so chapters were terribly weak and character development of the villains was disappointing. The biggest disappointment came in the ending. I turned the page expecting...and huh? That's it? Did he leave off the last few pages?

I cannot recommend it for even fellow Sherlock Holmes fans, let alone fans of quality fiction. A C+/B- read at best.

Here's what's really interesting, Andrew. This series has been optioned for TV. I haven't read the second book yet, so I'll see how that one reads.