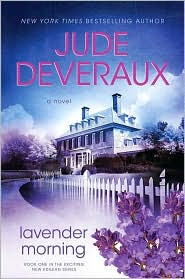 I have a confession to make. Lavender Morning is Jude Deveraux' forty-fourth book, but this is only the second one of her books that I've read. And, now, I'll probably hear from all kinds of her fans who will tell me I must read the all-time favorite Deveraux, A Knight in Shining Armor. Maybe someday. I will say, I can't wait for the second book in the new Edilean series.

Jocelyn Minton's mother died when she was young, and her father remarried a woman who enjoyed motorcycles with him. The five-year-old was lost in her family, until she was befriended by a neighbor, Edilean Harcourt. Miss Edi understood her, educated her, and shared a more cultured world with the youngster.

By the time Miss Edi died, Jocelyn was out of college, but teaching near her friend. She was shocked to learn that Miss Edi left her "a house you've never heard of in a town I carefully never mentioned." She also left her a note saying she found her a husband, a handsome young lawyer in Edilean, Virginia, a small town outside of Williamsburg. Poor Jocelyn is in for all kinds of surprises, as she learns that so much of Miss Edi's autobiographical details weren't quite right. She has so much to learn about her own family history, as well as Miss Edi's. Then, the stories and people of Edilean don't tell her everything she wants to know about her mysterious gardener.

It doesn't take long for the eighteenth-century house to work its way into Jocelyn's heart. But, it will take a very special person to help her dig into Miss Edi's mysteries, stories that go back to 1941, at a time when Miss Edi had her own special love.

This review doesn't do justice to the magic, romance, and friendship in the first book in a new series. Deveraux created two generations of remarkable characters, beginning with Miss Edi and her friends, and ending with Jocelyn and the friends she makes, including her two tenants. And, she gave both Edi and Jocelyn a quick wit, challenged only by two remarkable men. Lavender Morning kept me up one night, as I had to finish it to discover the secrets of this book. I have the feeling there will be more secrets in the next two books.

This looks like an interesting book. Thanks for the review.

You're welcome, Angie. I really liked this one!

Hi.
i just finished reading "lavender morning", but I don't get the secret between EDI & ALEX?

My mother and I both read this book recently I don't get the secret between Edi & Alex either. It ends as if the main characters now understand what Alex was thinking, but I totally didn't get it.

I'm so glad I'm not the only one who doesn't understand the attachment between Alex and Edi. Not knowing kind of spoiled the book for me.

And, it's been so long since I read the book that I can't even remember the scene or the chracters.