Valley of the Lost by Vicki Delany 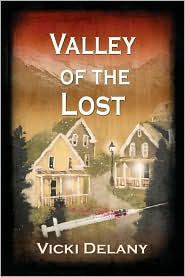 There are some outstanding traditional mysteries coming out of Canada. Louise Penny's Armand Gamache mysteries immediately come to mind. Although I missed Vicki Delany's debut novel, In the Shadow of the Glacier, after reading Valley of the Lost, I'm willing to put her up there with the other Canadian authors who write intriguing police novels.

When Lucky Smith found a dead woman in the bushes near the Trafalgar Woman's Support Center, the former hippie brought home the baby that was beside her. Lucky's daughter, Molly, wasn't happy because as a police constable on probation, she needed her sleep. But, despite the baby that cried all night, Molly willingly teamed up with Sergeant John Winters to try to find the woman's killer. But, Ashley's past isn't easy to track down. No one knows her last name; she seemed to be off heroin, but died of an overdose. Is it just one more death to be attributed to the current rash of drug crimes in Trafalgar?

While Winters struggles with the case, his wife, Eliza, is struggling with her own issues. As a high-profile model, she's in demand to act as a spokesperson for a resort development that is tearing apart the community. And, since they only moved to Trafalgar after Winters left a job as a homicide cop in Vancouver, she'd like to fit into the community.

Delany's mystery combines the best of traditional mysteries with my beloved police procedurals. There is a focus on the investigation, but the author doesn't neglect the other people involved, Molly's parents, Winters' wife, a local newspaper reporter, Ashley's former roommate. Anyone could be connected when the police don't know who the victim is. Winters is very frustrated when he says, "A murder investigation starts with the victim....Who hated/feared/loved/had an accident with/even a chance encounter with the victim so that he or she ended up killing her? It all flows from there."

And, Vicki Delany successfully brings all of that flow together in a fascinating mystery, Valley of the Lost. Delany is an author to watch.

It's always good to hear about books from Canada. I like SciFi from there too - a whole different focus.

You're welcome! We don't get enough attention paid to books from Canada here. It is good to hear about some of them, isn't it? Thanks!

Lesa, I really enjoyed this book. Read it this weekend while nursing a cold. I'm becoming quite a fan of this series and Vicki's writing. It just kind of creeps up on you, the suspense I mean, and all of sudden you realize that you are turning the pages faster and faster. Love that.

Sorry about the cold, but I'm glad you had a good book to read. I'm a new fan of this series, but I really liked this book. I'll be watching for future ones.