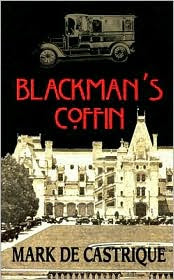 Mark de Castrique was a new discovery for me. I'd never read his other series featuring Barry Clayton, an ex-cop who returns home to help run the family funeral home business, in Gainesboro, North Carolina. If that series is as fascinating as Blackman's Coffin, I don't know why I haven't heard anything about de Castrique.

Sam Blackman was a Chief Warrant Officer in the Criminal Investigation Detachment of the U.S. military, until he lost a leg in Iraq. He stirred up too much trouble in Washington, D.C., testifying about the deplorable conditions at Walter Reed, so he was sent to Asheville, NC Veteran's Hospital for rehabilitation. He was a little angry and curt when Tikima Robertson showed up at his hospital bed, but the former vet and security consultant finally got through to him. So, it came as a shock when he learned she was murdered the same day she visited him.

Sam invited himself to Takima's funeral, and his courage in speaking at the service, brought Nakayla Robertson, Tikima's sister, to the hospital. And, she brought along a journal that told a story about a young boy, an amputee, who lost his leg to a bear trap on the Biltmore Estate. Before Sam and Nakayla can discover the secret behind the journal, Tikima's apartment is trashed. It takes a ninety-year-old secret, two murders, and a break-in to arouse Sam's interest in the case. Before he knows it, he's deeply involved in an investigation, after the police missed some clues in Tikima's car.

Mark de Castrique skillfully brings a cold case and a modern murder together in a story of family secrets. Sam Blackman is a realistic character, struggling with the loss of his leg, his parents, and the relationship with his brother. Tikima and Nakayla Robertson successfully restore his confidence, in their need of assistance. Blackman's Coffin brings together diverse elements; the history of Biltmore, a cold case involving murder, a modern-day murder, the author, Tom Wolfe, and two determined investigators. It's a compelling, fascinating story. I couldn't put this book down, so I'm hoping there will be another Sam Blackman book in the near future.

That sounds like a great book. I never heard of this author before.

Have a great week!

Thanks for the comments. It is a terrific book. I'd recommend it to anyone who likes a strong character, interesting storyline, and cold cases. Loved this book!

So glad you liked it. Blackman's Coffin got great reviews and the hardcover sold out very quickly but it is available in trade paperback. This August we publish the second book in this new series, The Fitzgerald Ruse, which Barbara thinks is equally wonderful.

This does sound good, Lesa! I love the cover.

Thank you, Robert. Naturally, I'm going to take Barbara's word for it that The Fitzgerald Ruse is just as wonderful. Thank you for passing on the information about the paperback. And, thank you for publishing such wonderful books.

If you read it, Wendy, I'll be waiting to read what you think. I really enjoyed it!

This book is definitely going on my "To Read" list. I really loved "Grave Undertaking" from the Barry Clayton series and am looking forward to this one. Your reviews haven't led me astray yet.

Thank you, Kara! I'll have to go back and try the Barry Clayton books. Hopefully, I give you enough to know if you'd be interested in a book or not.