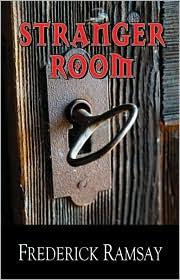 In the last week, I've discovered some wonderful mystery authors who I plan to continue to read, and two of them were published by Poisoned Pen Press. First, I read Mark de Castrique's Blackman's Coffin. Then, Sunday I read Stranger Room by Frederick Ramsay, an excellent police procedural with a wonderful cast and a 150-year-old cold case. Strong characters, a cold case, and a police procedural are hard to beat, in my opinion. Throw in not one, but two, locked room murders, and Stranger Room is a treat.

Jonathan Lydell III is proud of his family history, including a family that was one of the First Families of Virginia. He's planning to exploit that history by renovating his ancestral home, and opening it to the public. So what if a man is murdered in the locked stranger room on his property? He was a stranger, after all, or he wouldn't have been staying in the room designed for paying guests. And, it isn't as if someone hadn't already died in that room, even if it was 150 years earlier.

But, Sheriff Ike Schwartz and FBI agent Karl Hedrick aren't impressed with Lydell's family history, or his present life, living with an adult daughter rumored to drink heavily. They are intrigued with the murder in a locked room, and it's not easy to investigate. Both men also have other problems. Schwartz still has to deal with former cops who were crooked, but still try to stir up trouble in Picketsville. Karl, who is on loan to the sheriff's department, is waiting for the results of an FBI investigation to see if he'll be reinstated. And, then there are the problems with their personal relationships. Since Schwartz is dating the local college president, and Karl is living with a white policewoman, the townspeople don't always hide their disapproval. But, no matter what they're dealing with, they can't escape the strange happenings at Lydell's house.

Ramsay skillfully handles the cast of characters in a complex crime novel that also examines social prejudices. Ike Schwartz is a wise sheriff, who deals with his staff, the community, and his relationship with a touch of humor. I'm sorry I missed the Ike Schwartz mysteries that came before Stranger Room. I won't miss future books in this series.

"Stranger Room" sounds excellent, Lesa. Thank you. I went to his site. I love the cover of "Choker". Isn't it awesome?

Yes, I agree with you, Mel. I really liked the cover of "Choker". I'm looking forward to that one.