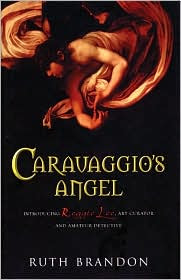 My review of Caravaggio's Angel, as it appears in Mystery News.

Ruth Brandon debuts the first book in a series featuring Dr. Reggie Lee, an art curator for the National Gallery in London. Brandon combines art history and French politics in a mystery that falls flat.

Reggie's discovery of a rare pamphlet at a school fair leads to an obsessive three-year quest. The pamphlet tells the story of the theft from the Louvre of Caravaggio's painting, St. Cecelia and the Angel. The painting spent two weeks traveling around France, and when it was returned to the Louvre, the small pamphlet was released, with photo's of the painting's journey. Shortly afterward, a young painter was found hanging, with the pamphlet beside him. The pamphlet, the painting, and the story became part of art history.

Reggie wants to put together a small exhibition with the three known copies of the painting. The Getty agrees to loan their copy, and, at first, the Louvre agrees. However, suddenly, Antonie Rigaut, in charge of the museum's Italian collection, withdraws permission. Reggie thinks she can pull strings, but all doors are shut in her face at the Louvre, and she can't connect with Rigaut. Frustrated, she finds herself at the address where the painter died, and is amazed to find Manu Rigaut living there, nephew of Armand. Manu knows the story of the pamphlet because it is a family story. His grandmother found the young man's body because he was her brother. Manu sends Reggie to meet his grandmother, Juliette.

Juliette has stories to tell Reggie, and a copy of St. Cecelia and the Angel on her wall. But, all of Reggie's attempts to uncover more about the artwork are blocked by Manu's father, Jean-Jacques Rigaut, the Interior Minister of France, a man with higher political ambition. Suddenly the opposition turns to death, and Reggie doesn't know where to turn. But, she's determined to exhibit the paintings, and she's not going to let death or politics stand in her way.

I couldn't feel any sympathy for Reggie Lee, who became a dislikable character by the end of the book. Although she seemed timid and unsure of herself at times, she was obsessed with two things, the Caravaggio paintings, and men. Nothing was going to stand in Reggie's way when it came to either of them. Throughout the course of the book, she continued to try to impress an ex-boyfriend who had dumped her. She slept with a married journalist, although she liked his wife and children. She even fantasized about her sexual attraction to Jean-Jacques Rigaut, a man who has shown that he's brutal and powerful.

At the end of the book, Reggie proved to be as manipulative as the Interior Minister in order to get her exhibition. She might have brought down a killer, but it felt as if she used blackmail and duplicity to bring about a resolution that would benefit her, not to successfully resolve a mystery.

There were also too many unexplained French sentences in the book, which I found troublesome. Other readers might feel the same way.

If a reader is looking to learn about art while reading an enjoyable crime novel, I would recommend Hailey Lind's books, rather than the Reggie Lee mysteries.

You know, one of the things I like about your reviews is that you are willing to say, "read that not this."
I have been in the midst of a full scale house cleaning purge and discovered yesterday that I have THREE of the Hailey Lind books-unread. They were buried in the back of a bookshelf (on two separate shelves)that had double layers of paperbacks. I suspect they got raves on DL, I found the books brought them home and prompty forgot about them. Or maybe I got the second or thrird and puut off reading it until I had the first, but by then had forgotten why I wanted them....I have found some really interesting books the past couple of days.

I like Hailey Lind's books, but I can't read too many at a time. I get a little exasperated with the character. But, they are fun. And, at least she isn't as sleazy as Reggie Lee. I just couldn't like her.

I bet you found some interesting "lost books"! We ought to trade closets sometime!