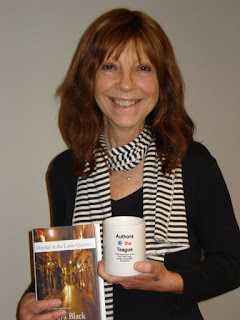 Cara Black appeared at the Velma Teague Library to discuss her mystery books, the Aimée Leduc Investigation series. She introduced Aimée as half American and half French. She's the owner of a computer security firm, with her partner René, who is a dwarf. There is a DeLuc Detective agency in Paris, so Black reversed the name. Aimée inherited the business from her father. She rides a scooter, and likes bad boys.

Like Jacqueline Winspear when she appeared for Authors @ The Teague, Black referred to Stephen King's book, On Writing, when she talked about her latest mystery, Murder in the Latin Quarter. She said King talks about writers, where they get their ideas, and how it all comes together. She said she thinks of the process as rocks, several of them. First, you hear about an idea, and then something comes together. Rocks need to ignite and fuse together. That's how the ideas come together for a book.

Black's editor provided the first rock or idea for the latest book. She said Aimée Leduc has never had a case on the Left Bank, so maybe she should cross the river in this one. Cara rode her bike up and down a boulevard, but each area she saw was too different to provide one setting. Paris is divided into 20 districts.

The second rock came from a friend in Paris who had a daughter in high school. The students there met urban explorers who went in the underground tunnels in Paris. They explored them, and partied. Cara asked if she could go down in the tunnels. So, they received permission to go underground beneath the high school.

The third rock came from a friend, a Commissaire, a high-ranking inspector in Paris. Cara takes him to dinner when she goes to Paris, plies him with drinks, and asks what he is working on. She once asked him why he talks to her, and he said because he wants her to get it right. In 2007, he said he had just come back from his final testimony in England, where he spent five hours testifying in English. When she questioned for what, he said, oh, I guess I didn't tell you. He was in charge of the Princess Diana investigation, and this was the final inquiry in London. When asked, he said their findings were that the chauffeur was high on alcohol and drugs, and blood levels showed that.

Black decided then to set her story, Murder in the Latin Quarter, 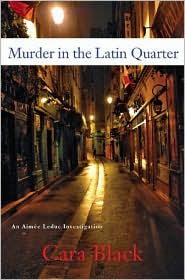 in September 2007, two weeks after the car crash, at a time when the world was still watching. The Aimée Leduc series is set in the mid-90s. And, people don't remember what was happening at that time.

In setting the book in the Latin Quarter, Black picked one of the oldest parts of Paris. The Gauls and Romans were there, and there is still a great deal of Roman influence left in Paris. There was a Roman road running through it. Black asked a man what the scallop shell on a building meant, and he said it was part of the old pilgrimage route to Spain. The Sorbonne is in the Latin Quarter. It was the first university, and everyone from Europe came there. They spoke Latin at the Sorbonne, hence the name, the Latin Quarter. The Grandes écoles were here. In order to get in, students must take competitive written and oral exams. The graduates became part of the old boys' network, the power base of France. Aimée would have hit against that wall.

After reading from Murder in the Latin Quarter, Black took questions. The first one was about her love of Paris. She said she grew up in the San Francisco Bay area, and attended a French Catholic Girls' School. Her father was a Francophile, who liked art, and loved good food and wine. While Cara was in high school, she read a book by Romain Gary, the French author who won the Prix Goncourt twice. He was married to the actress Jean Seberg. Cara wrote a fan letter to Gary, and when she received a thank you note back, with his address in Paris on the back, she took it as a personal invitation to visit. When she was backpacking in Europe at 18 or 19, she went to Paris, and decided to go see Mr. Gary. She found the address, a beautiful building, and went up an elaborate staircase. When a man opened the door, she told him she had written a letter, and he answered. He told her just a minute, and slammed the door. When he reopened it, he said, how about coffee. They went down the street to a cafe, where there was an espresso and a cigar waiting for him. When asked, what about her, Gary replied, she'll have the same. So she had her first espresso and her first cigar, and tried to act sophisticated without getting sick.

When Black went back to Paris in the 1980s, a friend took her to the Marais, and showed her where her mother lived as a hidden Jewish girl during the Second World War. She wore the yellow star, and hoped she would be reunited with her family, but after the war, she found her family had died in Auschwitz. In the 90s, Cara went back to France, and had one night in Paris and went back to the Marais. This story led to the first Aimée Leduc Investigation, Murder in the Marais. Her friend's story was one of the rocks that led to the book. In addition, Black was reading P.D. James. She appreciated the psychological depth and social context of the books. She appreciated An Unsuitable Job for a Woman, the book that introduced Cordelia Gray, an investigator. She wanted to do something similar in her first book. She was asked if she knew of any French women detectives, and she said in 1994 there were three women who owned their own detective agencies in Paris, and Black met them all.

She was asked to go back and discuss the tunnels and catacombs under Paris. She said the catacombs had lots of piles of skulls and bones. She said you have to go deep under ground, and it's very tiring. The city is built on limestone, that was dug out to for buildings, and the bones were moved to the limestone pits. There are different levels under Paris; for the sewers, catacombs, metro level, and more.

Cara said her next book is done, and was sent to the editor yesterday. It takes place a month after Murder in the Latin Quarter, in October, 1997. It's called Murder in the Palais Royal. She said she didn't take that cover photo, but it's a great one, showing the arcade with its gilded fence. The fence is gold-tipped. And, it has a woman running in high heels. Cara Black said she could just see her character, Aimée Leduc.

Oh great --- this sounds like another series that I am going to have to read :) I absolutely love France (I was a French major many moons ago) so the setting has grabbed my attention from the start.

Oh, Molly. If you were a French major, you'll enjoy the series even more than I did. This is one to put on your TBR pile.

In college my major was Spanish and my minor was French. I wanted to be a translator. I speak Spanish better then French now. It's hard when you don't have anyone to practice with.

You could brush up your skills and read about Paris by picking up one of these books, Mel!