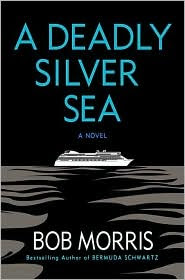 It's McGyver on the high seas in Bob Morris' latest Zack Chasteen adventure, A Deadly Silver Sea. When the world's most exclusive cruise ship sailed from Miami, it sailed into explosive adventure.

Zack Chasteen has gone from pro football player for the Miami Dolphins, to ex-con (pardoned), to owner of Chasteen's Palm Tree Nursery. Now, he's a doting husband, accompanying his wife, Barbara Pickering, on one last trip before she delivers their first child. As owner/publisher of Tropics travel magazine, she's an invited guest on the star-studded debut cruise for only 100 people on the Royal Star.

It doesn't take long for terrorists to kill everyone in the engine room, and take over the ship. It's a small group, but they are able to separate the men from the women, leaving Zack worrying about Barbara and their baby. And, a worried Zack spells trouble for the terrorists. Fortunately for him, there is no honor among thieves.

I wasn't crazy about the format, alternately between Zack and the terrorists, radicals who all had their own agendas. There isn't a great deal of character development in A Deadly Silver Sea. But Zack is an engaging character who, despite the relentless pace of the book, always ends up in odd circumstances. Even Zack understood it was a little unusual to be in a "small boat with a defrocked priest, a former nun, a boatload of Haitian refugees, and a voodoo priestess."

Bob Morris' A Deadly Silver Sea gives readers an ingenious hero, terrorists on the high seas, scheming thieves, humor and suspense, along with a pregnant woman who could give birth at any time. What more do you want in an entertaining book?

Terrorists in the engine room?? Did I mention that i am going on a cruise in the spring? I don't want to hear that sort of thing! lol..lol

You didn't mention it, Caite. You might not want to read this book until you get back safely. (grin)