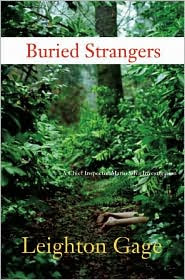 Leighton Gage successfully takes advantage of an urban legend in his latest Chief Inspector Mario Silva crime novel. Gage's novels highlight all of the dirty politics and gritty life in Brazil, while examining the country's crime and history. And, all of this is done in the framework of Silva's police investigations.

When a dog found a bone in the rain forest outside São Paulo, it led to the discovery of an unmarked cemetery. Mario Silva, Brazil's top cop, was called in because the clandestine cemetery contained thirty-seven corpses, many of them children, and the bodies were buried in family groups. Silva realized, even if his boss didn't, that they might be looking at one of Brazil's all-time great serial killers.

But, in Brazil, nothing is what it seems. Silva and his team work clandestinely, hiding the investigation from his boss. What do all of the bodies have in common, and what is the link to the medical community? One pathologist is afraid to suggest that body parts are missing. When one policeman is blown up, and one of Silva's team disappears, he's determined to bring the case to a successful conclusion.

Silva successfully maneuvers through the corrupt politics and life in Brazil, a country where bribes are a way of life, hundreds of policemen are killed by political groups and criminals, people live in poverty in shantytowns, and medical care can be bought by the highest bidder. Gage's novels are successful because of the character of Silva, a man trying to find justice in a corrupt world. If the police didn't share that dark humor common among those working with life and death, these novels might be too depressing. But, the comic relief allows for alleviation of the tension of the stories.

Buried Strangers, like Blood of the Wicked, allows the reader to follow an intense investigation, knowing Mario Silva will take us safely through the dangers and traps of Brazil.

I love the Soho Crime series of books. Every one of them takes me to some interesting place. I guess that's part of that series "thing" is that the setting is a magor factor in the plot.
Caryn

Soho crime does do interesting books, don't they, Caryn. I have a pile of them in my closet, along with other books, but their's always have an interesting setting or premise.

I have both of Leighton Gage's books here in my 1300. I keep meaning to read them and hopefully will this year. Good review. I'm really beginning to enjoy mysteries set in countries that I'm unfamiliar with the culture. It really adds to the experience to see how a crime might be solved there.

Or, in the case of Leighton Gage's books, how some police do not solve crimes. I think you'll find the books very interesting, Kay.