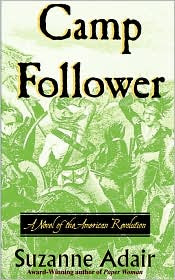 I know the words "Camp Follower" and "Yule" don't seem to go together, but they will once you understand the context. It all started with Suzanne Adair's latest novel of the American Revolution, Camp Follower.

Adair has written a fascinating series of books that bring to light aspects of the American Revolution that are not well-known. To begin with, her books, including Paper Woman and The Blacksmith's Daughter, are set in the southern theater of the war. The first two books in this series, like this one, are set in the Carolinas. Those two books feature strong women who are neutral in the war, but suspected by Lt. Dunstan Fairfax of being rebels or sympathizing with them.

In Camp Follower, Adair introduces another fascinating woman, Helen Chiswell. She's first introduced as a young girl of seventeen named Nell Grey, a simple impoverished country girl sold to Silas Chiswell as his wife. Twelve years later, in 1780, she's Helen Chiswell, an impoverished widow, trapped by the loss of her husband's estate. When Fairfax shows up at her house, he accuses her of sheltering a rebel, although Helen is a journalist for a Loyalist newspaper. To escape her circumstances, she agrees to a pact with the devil. She'll accept a job covering Lt. Colonel Tarleton's British Legion, traveling with his troops as a camp follower. Unfortunately, she'll be traveling under the guise of Fairfax's sister.

Adair provides readers with everything they could be looking for in a novel, from historical details about the war, Tarleton, and the role of camp followers, to romance, suspense, and a creepy villain in the form of Fairfax. There's the mystery as to why someone would want to throw suspicion on Helen. And, then there's the the character of Helen herself, a woman who grows into her strength through hardship and need, but once was an innocent girl who practiced the old religion back in England.

The old religions in Britain celebrated the earth, nature, and fertility. They were pushed aside by the Protestant religions, but the old customs left traces behind. In Camp Follower, Yule is celebrated on Dec. 24th as an evening of dinner, followed by dancing.

I asked Suzanne Adair if I could quote her comments about Yule, since it was perfect for Sunday Salon just before Christmas. She said, "Camp Follower depicts a Yule celebration in the backcountry of South Carolina during the Revolutionary War.

"Why Yule and not Christmas? Well, contrary to popular opinion, Christmas wasn't a big holiday for the Colonials or the occupying British. There was no Christmas tree, no roasted goose, no weeks of baking and flurry of gift giving, no packing the church pews for a Christmas Eve/Day service, no bearded plump guy in a red suit whizzing around the world in a sleigh full of goodies. Decades later, Prince Albert would initiate some of those traditions, then they'd gather momentum over subsequent decades into what we have now. But it wasn't happening yet during the Revolutionary War years.

"In December 1780, most people associated with King George III's empire, regardless of religion, were still honoring the ancient, annual rhythm of solstices and equinoxes. Makes sense, when you consider how many of them made a living off the land and thus had to stay attuned to the seasons. For the winter solstice, they might have decorated their homes with some greenery, and had a feast and/or dance on Yule. The winter solstice and Christmas Day occur close together, some years almost atop each other, so those people who were Christians might also have attended a service in their churches on Christmas Day. But this would have been a somber, simple service with no glitz; Protestants -- especially those of the backcountry, folk persuasion -- frowned on making a material big deal over the birth of Jesus.

"Seems peculiar to most folks in 2008, when we're so surrounded by the commercialization of Christmas, yes? It also threatens those who are only comfortable with a picture of this country's founding mothers and fathers as Christians as we know them today, not as an amalgamation of people of different faiths whose spirituality occupied a zone in the evolutionary continuum.

"Regardless of religious persuasion, Yule in Revolutionary America was a time of peace that almost everyone used for quiet reflection on a year almost over."

If you're looking for a fascinating series of novels with this kind of historical background, you can't go wrong with Suzanne Adair's books, including the latest, Camp Follower.

And, I'd like to borrow Adair's words, and wish you, in this hectic season, "A time of peace...for quiet reflection on a year almost over."

Lesa, many thanks for your gracious review of Camp Follower and also the timely holiday message. Now, with our "down" economy, we can learn so much from history and our foremothers and forefathers. They gave thanks for what they had instead of dwelling on all they'd lost. Happy holidays. Suzanne

Thank you, Suzanne! You're right. That is a perfect lesson for this year, and, really all years, to be grateful for what we have - our famlies and friends, most of all.

This series sounds awesome. As you may know I am taking grad classes towards another masters. This one in American History. I would love to review one of Suzanne's books on my blog. This one sounds terrific as I'm sure they all are. I know my fellow students and professors will be interested in this series. I will definitely check the author's website and her novels out. Thanks Lesa for your reviews and worthwhile discovery!!

You're welcome, Wisteria. Suzanne's books are almost a treatise on the American Revolution in the South. When I first read Paper Woman, I wasn't aware of the large number of neutrals during the war.

Love the idea of this kind of Christmas, quiet, peacful! I enjoy Suzanne's series as well.

Wisteria, I'd be glad to put you in touch with historians who specialize in the Southern theater of the Revolutionary War. Let me know how I can help you with your programs. And thanks for stopping by. Suzanne

Lonnie, ain't it the truth? We're all too busy in December. Thanks for your comments! Suzanne

Its a lovely series, with meticulous research. To those of us who find this period of history fascinating, we tip our hats to you, Suzanne.

To Lesa and Suzanne - you have touched me with this line - "A time of peace...for quiet reflection on a year almost over." I wish you both the same.

Suzanne's comments on celebrating the solstice hit home as we always have a party on, or near, the winter solstice. Last night there were 19 of us in our greenery-filled house, feasting and enjoying each other's company. No dancing though -- too crowded.

Thanks, Kaye. So glad you enjoy the series! Suzanne

Vicki, your solstice celebration sounds like a breath of fresh air this hectic time of year. Thanks! Suzanne

I'm so glad you all stopped in to share comments with Suzanne, and that she took time to check back. Friends are an important part of that quiet celebration of the season. And, I consider all of you friends who have stopped in to share books, and thoughts, and friendship.

Thank you for both an informative review as well as thought-provoking historical details. Kudos to you both!

Thank you very much, Mary! I appreciate it.